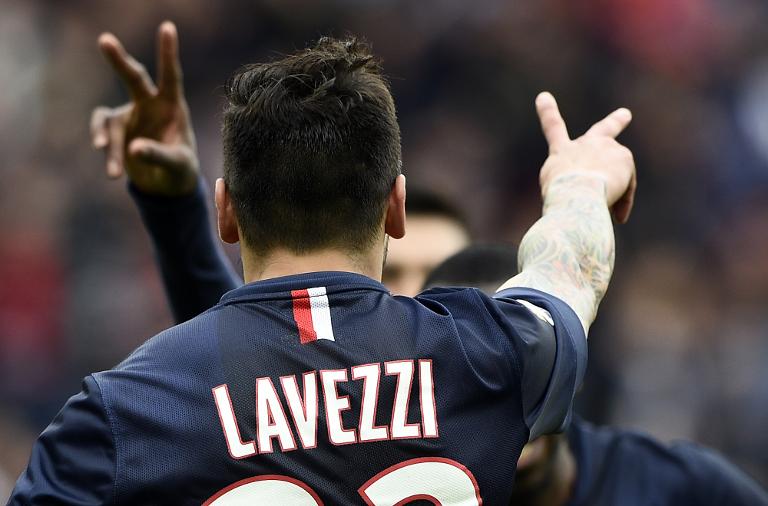 Paris Saint-Germain quickly got back on track after their Champions League loss to Barcelona as Ezequiel Lavezzi netted a hat-trick in a resounding 6-1 win over Lille at the Parc des Princes on Saturday.

With leading scorer Zlatan Ibrahimovic suspended, Maxwell opened the scoring inside the first minute, Edinson Cavani netted twice and Argentine forward Lavezzi got the first hat-trick of his Ligue 1 career to hand the capital club their biggest league win since April 2012.

The win moved them three points clear of Lyon at the top of the table before OL face Reims on Sunday.

With Lille having won six of their previous seven matches to move into contention for European qualification, this looked likely to be PSG’s toughest remaining fixture as they battle it out for the title with Lyon.

However, the northern club’s normally watertight defence crumbled as they fell to their biggest top-flight defeat since a 6-1 hammering at Monaco in April 1985.

But for PSG it was the perfect response after what was ultimately a rather meek Champions League quarter-final loss at the hands of a far superior Barcelona side.

“After the disappointment of our elimination we needed to focus on the league again, that was the aim of our preparation over the last three days,” said coach Laurent Blanc, who dismissed suggestions that his side had sent out a message to their title rivals.

“We have not sent anything at all. We are just worrying about ourselves and we need to pick up points.

“It was good to score so many goals and it would be good to carry on like this. We have respect for the other teams but our destiny is in our own hands.”

Paris came flying out of the blocks and no Lille player had touched the ball before they fell behind with just 25 seconds on the clock.

Serge Aurier crossed low from the right and Maxwell’s first-time shot evaded the grasp of Vincent Enyeama in goal.

The lead had been doubled with fewer than four minutes played, Javier Pastore finding Cavani, who beat Enyeama with a brilliant chip.

Cavani then set up Lavezzi to tap in the third and he struck again from a Blaise Matuidi assist just before the break.

It was not a perfect first half for Blanc though as he lost goalkeeper Salvatore Sirigu and Aurier to injury.

Nevertheless, the outcome of the game had been put beyond doubt before Marko Basa headed in for the visitors, and the hosts then underlined their superiority by adding two more goals in the final 20 minutes.

First Cavani scored his 11th league goal of the season from the penalty spot after Lavezzi had been pushed over on the point of shooting by Sebastien Corchia, who was shown a red card.

And then Lavezzi held off two defenders and finished into the bottom-left corner to secure a superb win that is a big step towards a third consecutive league title as Paris bid to win an unprecedented domestic treble.

“Lavezzi is an example of how things can change,” added Blanc of the former Napoli forward, who had previously netted just four league goals this season.

“He has often had a lot of chances but converted very few of them. Today he scores a hat-trick. That proves you need to believe in players and make sure they are in the best possible condition.”

It was another high-scoring encounter following Marseille’s spectacular collapse in losing 5-3 to Lorient on Friday at the Stade Velodrome.

A fourth consecutive defeat for Marcelo Bielsa’s side was a huge blow to their hopes of qualifying for the Champions League, and a win for third-placed Monaco at Lens on Sunday will put them five points clear of OM in the race for a podium finish.

Bordeaux needed a late Wahbi Khazri free-kick to draw 1-1 with Metz, while Rennes beat Nice 2-1 thanks to a last-minute Anders Konradsen goal and Guingamp triumphed 2-0 at Caen.

Toulouse drew 1-1 with Nantes and Francois Kamano’s double gave Bastia a 2-1 win at Evian in a key game at the foot of the table.