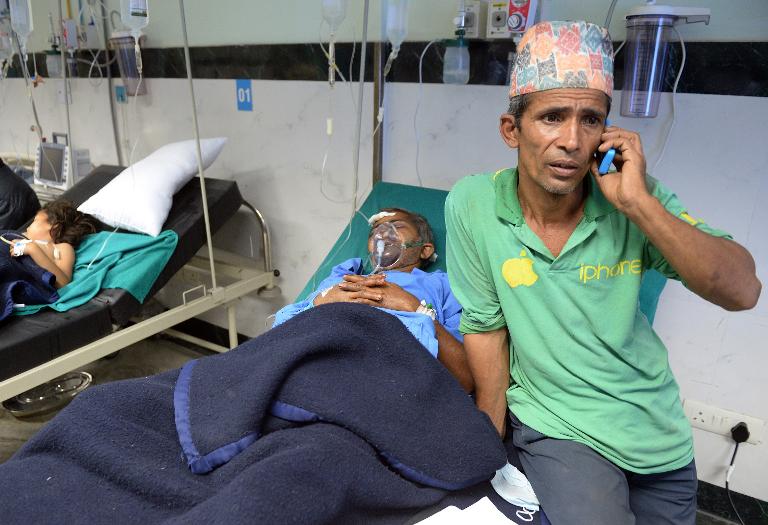 As the death toll in the Himalayan nation surpassed 2,500, the US together with European and Asian nations sent emergency crews to reinforce those scrambling to find survivors in the devastated capital Kathmandu and in cut-off rural areas.

“Tragically, more bodies are being pulled from collapsed buildings every hour,” the Australian Red Cross said in a statement.

“Communication is down in many areas. Widespread destruction, rubble and landslides are preventing access to provide aid in many villages.”

Mike Bruce, regional communications manager for the Plan International aid organisation, said many areas — both rural and in some of the larger towns — had suffered landslides and roads were blocked.

Although mobile networks appeared to be being restored by mid-afternoon on Sunday, he said, coverage remained sporadic.

“People are sleeping on the streets and cooking outside for the most part. And we are talking about very, very poor areas of Nepal — areas that are already suffering a great deal,” said Bruce.

Other aid organisations relayed fears that stocks of essential supplies were rapidly running out, and described the fearsome effects of the quake.

“We witnessed terrible scenes of destruction — hospitals were evacuated with patients being treated on the ground outside, homes and buildings demolished and some roads cracked wide open,” said Eleanor Trinchera, Caritas Australia programme coordinator for Nepal, who was an hour outside the capital when the quake struck.

A lack of electricity would soon be complicated by a scarcity of water, aid groups said, with medical supplies also dwindling, while Oxfam told AFP morgues were reaching capacity.

“Communication systems are congested and hospitals are crowded and are running out of room for storing dead bodies,” Helen Szoke, the charity’s Australia chief executive, told AFP.

Survivors also slept in the open in Kathmandu overnight, braving the cold for fear of being crushed by teetering buildings.

Hundreds of structures, including office blocks and a landmark nine-storey tower, crashed to the ground at around midday on Saturday when the 7.8-magnitude quake struck.

As Nepal began to take stock of the devastation, Britain released Â£5 million ($7.6 million, 7.0 million euros) for the British Red Cross and “aid workers on the ground so they can provide desperately needed supplies”, international development secretary Justine Greening said.

Britain has long historic ties with Nepal and recruits Gurkhas to serve in its army.

A US disaster response team was also en route and an initial $1 million in aid to address immediate needs had been authorised, the US Agency for International Development said.

India on Sunday dispatched 13 military aircraft loaded with tonnes of food, tents, blankets and other aid for its devastated neighbour.

“Even now many people buried under the rubble must be alive,” Modi said during his monthly radio programme.

“Our effort will be to rescue as many people alive as possible.”

Russia said two of its planes would fly out Sunday, carrying specialist rescuers, doctors and psychologists as well as equipment including helicopters and drones.

Sri Lanka sent a military C-130 aircraft carrying a 48-member medical and relief team along with supplies and power generators, while a second aircraft would take more doctors and nurses.

A 62-member Chinese search and rescue team with sniffer dogs was on the ground in Kathmandu and a medical team would be mobilised, state news agency Xinhua reported.

A Singaporean search and rescue team was also heading for Nepal, while Japan’s 70-strong emergency services team departed on Sunday.

A 45-strong team of rescue experts, doctors and other experts, from Belgium, Germany and Luxembourg, was leaving on a Belgian military plane.

Israel said it was sending an aid delegation, including a team of paramedics and doctors.

Charity Christian Aid launched an appeal for funds and said it was working with partner agencies to reach the worst hit areas.