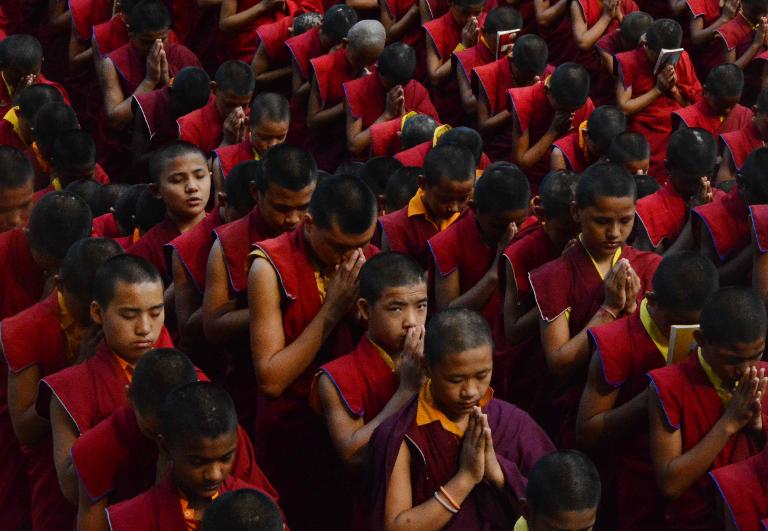 14:12 GMT – AFP IS NOW CLOSING THIS LIVE REPORT on the aftermath of the Nepal earthquake, which has killed more than 2,400 people.

Offers of help have poured in from around the world, with dozens of nations or aid groups volunteering everything from sniffer dogs to an inflatable hospital.

12:17 GMT – Head injuries – “We have treated many people since yesterday, the majority children,” said Acharya.

“Most patients have head injuries or fractures. Two of our patients died, two are critical,” he said, as people wept outside the hospital while they waited for news of loved ones inside.

12:15 GMT – Makeshift hospitals – Nepalese doctors have set up makeshift operating theatres as they work round the clock to treat the wounded.

Samir Acharya, a doctor at Annapurna Neurological Hospital, described how medics are working out of a tent set up in a parking lot after being overwhelmed by patients.

Tribhuvan International Airport general manager Birendra Prasad Shrestha said the runway had reopened after being closed for about an hour.

“The airport is open and functioning. We had closed the runway for an hour after the quake this afternoon, but we have resumed services,” Shrestha told AFP.

10:53 GMT – Streets – “People are sleeping on the streets and cooking outside for the most part. And we are talking about very, very poor areas of Nepal — areas that are already suffering a great deal,” said Brice.

10:52 GMT – Severed communications – “We know that in many areas — both rural and in some of the larger towns — have suffered landslides and roads are cut off,” said Mike Bruce, regional communications manager for Plan International aid organisation.

Although mobile networks appeared to be being restored by mid-afternoon on Sunday, he says, coverage remains sporadic.

10:49 GMT – UNESCO – UNESCO is trying to gather information on the extent of the destruction.

“We understand the historic Durbar squares of Kathmandu, Patan and Bhaktapur have been badly damaged,” Christian Manhart, UNESCO’s representative to Nepal, tells AFP.

The nine-storey Dharahara tower, a major tourist attraction in Kathmandu’s Durbar square with its spiral staircase of 200 steps, has been reduced to just its base.

— Offers of help have poured in from around the world, with the United States and European Union announcing they are sending in disaster response teams.

— National police spokesman Kamal Singh Bam says the number known to have died in Nepal has risen to 2,152 while 4,629 people are injured

— Officials in India say the toll there is 57, while Chinese state media say 17 people had been killed in the Tibet region.

09:47 GMT – Sniffer dogs – China’s state news agency Xinhua is reporting that a 62-member Chinese search and rescue team with sniffer dogs is on the ground in Kathmandu.

09:30 GMT – Roads cut off – “We know that in many areas — both rural and in some of the larger towns — have suffered landslides and roads are cut off,” said Mike Bruce, regional communications manager for Plan International aid organisation

“People are sleeping on the streets and cooking outside for the most part. And we are talking about very, very poor areas of Nepal — areas that are already suffering a great deal”

“Electricity has been cut off, communication systems are congested and hospital are crowded and are running out of room for storing dead bodies.”

08:27 GMT – “Too much pain” – Kanchaman Tamang, a Nepali cook working for the Jagged Globe tour group, said the latest tragedy was particularly painful so soon after last year’s deaths.

“After last year’s avalanche, I never worried about coming back — I told my family I work at base camp and it’s safe, not like the icefall.

“I don’t think I will come back next year — this mountain means too much pain.”

08:26 GMT – “Shouldn’t have to die” – Ellen Gallant, an American climber and cardiologist, describes how she tried to help the injured but was unable to save one victim.

“I was outside, saw this huge blast cloud coming down. I ran into the tent, threw myself on the floor. When the vibration stopped, I went out and radioed over to the medical tent. They asked me and an Indian climber (a doctor in the Indian army) to take care of head injuries.

“We worked through the night, doing rounds, handing out medication, putting in IVs (intravenous drips).

“Of the nine patients, one of them died last night — a 25-year-old sherpa. His blood pressure had fallen — there was nothing we could do.”

08:18 GMT – Not meant to be – AFP Nepal bureau chief Ammu Kannampilly was at Everest base camp when the avalanche cascaded down the mountain, flattening everything in its path.

She talks to survivors about their experiences:

George Foulsham, who had returned this year for a second attempt after last year’s climbing season was cancelled, says the latest disaster felt like a message from the mountain. “I saved for years to climb Everest (but) it feels like the mountain is saying it’s not meant to be climbed for now. It’s too much of a coincidence to see this twice in two years.”

07:48 GMT – Near China – The latest quake struck northeast of Kathmandu near the border with China at a depth of 10 kilometres (6.2 miles), the US Geological Survey says.

“Just had our biggest aftershock yet here at C1 on Everest. Smaller than original quake but glacier shook & avalanches”.

“Just another earthquake now. And another three small avalanches. All good. Pfiu!!!”

07:32 GMT – Aftershock – USGS is reporting a quake aftershock of 6.7 magnitude has hit Nepal.

National police spokesman Kamal Singh Ban says the number known to have died in Nepal has risen to 1,953 while officials in India say the toll there now stands at 53.

Chinese state media says 17 people have been killed in the Tibet region.

06:10 GMT – Contacting citizens – Countries are rushing to contact their citizens in Nepal.

China says it is chartering flights to pick up 683 tourists.

Australia’s Foreign Minister Julie Bishop said in a statement that “at this point there are no reports of Australian deaths,” and more than 200 of the 549 Australians there had been contacted.

New Zealand’s Foreign Minister Murray McCully says over 110 nationals had been accounted for and Japan’s foreign ministry says it has set up a liaison office to help 1,100 nationals staying in Nepal.

“I ran and it just flattened me. I tried to get up and it flattened me again. I couldn’t breathe, I thought I was dead. When I finally stood up, I couldn’t believe it passed me over and I was almost untouched.”

05:35 GMT – First pictures – AFP photographer Roberto Schmidt, who was on assignment at base camp on Everest when the quake struck, has sent back his first pictures from the scene showing a terrifying cloud of snow and debris roaring towards the camp, flattened tents, and the injured being helped by fellow climbers.

The Khumbu Icefall is at the head of the Khumbu Glacier at 5,486 metres on Everest, not far above base camp and southwest of the summit.

04:42 GMT – “Cracked wide open” – Caritas Australia’s Eleanor Trinchera says she “witnessed terrible scenes of destruction –hospitals were evacuated with patients being treated on the ground outside, homes and buildings demolished and some roads cracked wide open.”

04:10 GMT – “Rescue main priority” – In the same statement Caritas Nepal director, Fr Pius Perumana SJ, says from Kathmandu: “It was the worst earthquake I have ever experienced in my life. The aftershocks are still strong.”

“Lots of houses have fallen down and there are lots with cracks. Thank God it was during the day and on a holiday as many people were outside when the quake happened.”

“Rescue is the still the main priority at the moment. Lots of people have lost their homes and are out on the street or in open spaces, so we will be looking to provide them with food and temporary shelter.”

04:07 GMT – “Devastation” – In a statement Caritas Australia quotes its programme coordinator for Nepal, Eleanor Trinchera, on the ground in Kathmandu, as saying “I have never seen so much devastation. While the streets are rife with activity and chaos as people try to find loved ones and friends, the city is paralysed with destroyed buildings, blocked roads, intermittent power and rolling aftershocks.”

Caritas Australia, part of the second largest humanitarian network in the world, has worked in Nepal for decades.

03:39 GMT – Missing – Ammu Kannampilly earlier spoke to Shinji Tamura, a guide with the Himex tour group, at the base camp ,who said at least 40 people were injured in the avalanche which was triggered by the massive earthquake

“Nobody knows how many are missing,” he said

03:21 GMT – “People stretchered” – “People being stretchered out as choppers land — half a dozen this morning. Weather clear, some snowfall.” Ammu Kannampilly says in a text message.

03:12 GMT – Snowfall hampers rescue – Attempts to airlift survivors from Everest base camp were thwarted on Saturday due to snowfalls and it was unclear whether new efforts would succeed.

Hundreds of mountaineers have gathered at the start of the annual climbing season.

Google executive Dan Fredinburg was the only climber killed to have been identified so far.

03:10 GMT – Rescue helicopters – “Fourteen deaths have been confirmed so far. We fear that the toll may rise, says Gyanendra Kumar Shrestha, an official in Nepal’s tourism department, of the Everest toll.

“We are trying to send helicopters for rescue.”

03:09 GMT – Rain forecast – Weather forecasters are warning that rain is on the way, with dark clouds looming over Kathmandu, promising more misery for displaced survivors.

India has sent two military transport planes and offers of help have come from countries in the region including Sri Lanka and Pakistan.

The US Agency for International Development (USAID) says a disaster response team is being flown in, while the Obama administration has authorised an initial $1 million “to address immediate needs”.

Britain, Germany, Norway, Spain and Israel have also pledged support and assistance, and international aid groups, including Action Against Hunger (ACF) and Christian Aid, have mobilised funds and teams to send to Nepal.

01:54 GMT – Casualties – At least 42 people are known to have died in India, including 30 in the eastern state of Bihar, while buildings in the capital New Delhi had to be evacuated.

01:43 GMT – IMF help – The head of the International Monetary Fund (IMF) Christine Lagarde says in a statement that the organization is ready to help Nepal quickly evaluate its financial needs

01:22 GMT – Travel alert – The US State Department has issued a travel alert saying citizens should “exercise caution when traveling in or planning departure from the country”

01:21 GMT – Blocked roads – The Red Cross says it is concerned about the fate of rural villages close to the epicentre of the quake northwest of the capital Kathmandu as landslides have blocked roads and damaged communications.

01:03 GMT – WELCOME TO AFP’S live report on the aftermath of a massive earthquake in Nepal that killed at least 1,200 people as it tore through large parts of Nepal, toppling office blocks and towers in Kathmandu and triggering a deadly avalanche at Everest base camp.

At least 1,170 people are known to have died in Nepal, officials say, making it the quake-prone and impoverished Himalayan nation’s worst disaster in more than 80 years.

But the final toll from the 7.8-magnitude quake could be much higher, and dozens more people are reported dead in neighbouring India and China.

Offers of help have poured in from governments around the world, with the United States and European Union announcing they are sending disaster response teams.