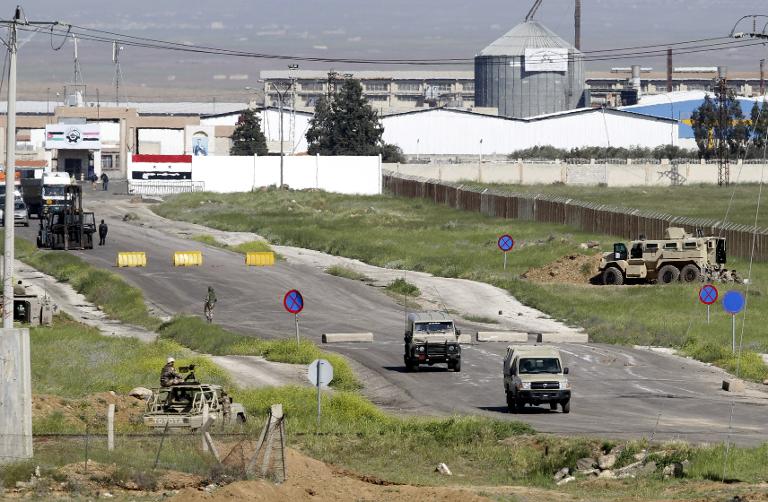 When security fears forced Jordan to close its last border crossing with Syria this month, it severed its most important trade route to the outside, further straining an economy already hit by fallout from war.

But the damage to heavily import-reliant Jordan is not just hypothetical — hundreds of importers and exporters lost millions of dollars worth of goods when rebels pillaged the vast free trade zone that straddled the border, most of it on the Syrian side.

Car importer Mohammed Bustnje says he was among the lucky ones, losing only tens of thousands of dollars when looters sacked his offices and made off with televisions, air conditioning units, even doors and windows.

Bustnje said he had had a premonition there would be trouble at the 700-hectare (1,730-acre) Jordanian-Syrian Free Zone, and moved all the vehicles he had warehoused there into Jordan.

“Thank God,” he said, “because the rest of the importers lost hundreds of cars” in looting after rebels seized the Syrian side of the crossing this month.

Nabil Romman is chairman of the Jordanian investment commission for the zone, which contains not only warehouses but even assembly plants for some goods.

He said there were more than 1,000 traders doing business there — Syrians, Jordanians, even Iraqis — with a combined inventory of more than $1 billion (917 million euros).

He said it is estimated that $100 million in goods was stolen.

The Syrian side of the border was seized on April 1 by rebels with links to the local Al-Qaeda affiliate, Al-Nusra Front, and the situation on the ground was volatile.

More recently, however, the security situation has become more stable, and there are reports that Jordanian traders are now able to get into the zone and are gradually bringing goods out.

But when what the Jordanians know as the Jareb crossing was captured from troops loyal to President Bashar al-Assad, it was not only the traders who faced immediate problems.

Hundreds of truckers were stranded on both sides of the frontier with their cargos, impacting Jordan’s wider population, not just its entrepreneurs.

Romman said the “Jaber crossing is a vital artery between us and Europe. Seventy percent of what we eat, of everything we import and export, passed through Syria.”

Goods were brought in and exported by sea from Lebanon, or even travelled overland through Turkey farther north.

Mohammed Daud, president of the Jordanian truckers’ union, estimates that the long-term damage from lost trade with not only Syria, but also Iraq, could reach $500 million.

He said around 2,500 trucks crossed the Syrian border daily before a pro-democracy uprising broke out four years ago and degenerated into civil war. That number was down to “a couple hundred when the border was closed. Now it is zero.”

Prime Minister Abdullah Nsur said earlier this week that Jordan was in a “state of siege”.

Not only is it effectively cut off from Syria to the north, it has also seen commerce with Iraq severely curtailed because of the conflict between the government and the Islamic State group there.

Jordan is a relatively poor desert kingdom and has virtually no oil reserves. Its major exports are phosphates, potash and limestone, as well as textiles and vegetable produce.

Economist Mazen al-Rashid said “the longer the borders are closed, the more serious the consequences will be for the Jordanian economy”.

“The decline in exports could exacerbate the trade deficit, which would force Jordan to borrow more to cover the difference,” a particularly unenviable situation considering that debt reached a record $30 billion last year.

Economist Yussef Mansur said the only solution now is to consider trade by sea.

Jordan is almost entirely landlocked, but has a miniscule coastline that gives it access to the Red Sea from the port of Aqaba.

It could also open a new link to the Mediterranean through the Israeli ports of Haifa and Jaffa, which “are nearby but expensive”.

Aqaba is 325 kilometres (200 miles) from the capital, meaning higher transport costs. On top of which, the cost relative to Jordan’s traditional markets of shipping to and from Aqaba would be more expensive.

The only real bright spot for Jordan has been the sharp plunge in oil prices, which means that the kingdom’s import bills are lower.