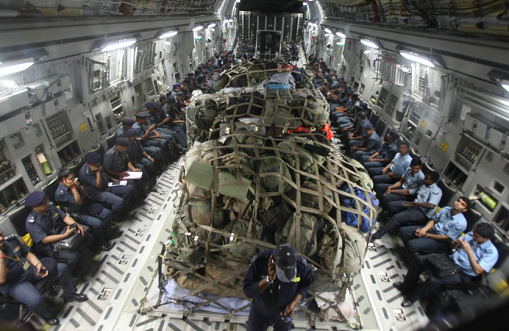 New Delhi: Scaling up relief and rescue efforts in quake-hit Nepal that was named ‘Operation Maitri’, India on Sunday deployed two dozen military aircraft and choppers and was also undertaking a “big evacuation” through the road route.Â

As a top Indian official described the situation in the Himalayan nation as “very, very serious”, nearly 1,000 trained personnel of the National Disaster Response Force(NDRF) were also pressed into service after Nepal was struck yesterday by the worst earthquake in 80 years, killing over 2,350 people.Â

A slew of steps were also taken for speedy evacuation of stranded tourists including goodwill visas to foreigners and mobilising buses and ambulances to bring them by road. Over 1,000 people have been flown from Nepal since Saturday.Â

An inter-ministerial team, headed by a top Home Ministry official, will also leave for Nepal soon to coordinate the rescue and relief efforts as part of ‘Operation Maitri’ or friendship.Â

He said while the rescue team were trying to evacuate nationals of other countries, Indians were the obvious priority.Â

India has deployed more military planes and in all there were 13 aircraft, six Mi-17 helicopters, two Advanced Light Helicopters while two more Mi-17 choppers were kept in standby. Four C-17 Globemaster-III and three C-130J Super Hercules planes were among them.Â

Defence Minister Manohar Parrikar said the aim of the government is to be the first to respond to any crisis in the neighbourhood and to do so in a “quick span of time”.Â

Ten tonnes of blankets, 50 tonnes of water, 22 tonnes of food items and two tonnes of medicines have been despatched to Kathmandu.Â

Three army field hospitals and engineering task force and medical units of civilian doctors have been sent to Nepal.Â

Jaishankar said today’s aftershocks have hampered the rescue and relief operations as Kathmandu airport was shut for long hours. However, the airport was later reopened.Â

He said the government has deployed 35 buses to evacuate stranded Indians in Nepal via two routes — Sunauli and Raxaul — along the Indo-Nepal border. “We are undertaking a big evacuation through the road route,” Goyal said.Â

The Secretaries appealed to the “thousands of stranded people” to be patient as conducting such salvage operations was difficult even as they assured that India would accommodate as many people as it can, including helping foreign nationals.