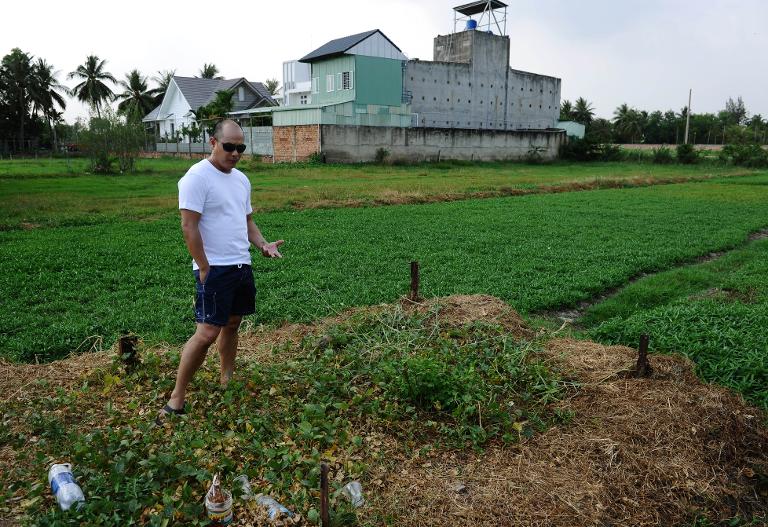 In the chaotic last days of the Vietnam War, the US airlifted thousands of children out of Saigon. Forty years later, many Operation Babylift survivors have returned, looking for answers from a family or country they never knew.

During the controversial mass evacuation, some 3,000 children were flown out of Vietnam to be adopted by families from America to Sweden. The very first Babylift flight crashed shortly after takeoff.

“My (adoptive) parents received a telegram… saying they couldn’t find us… we were missing and presumed dead,” said Landon Carnie, who was on the C5-A Galaxy plane on April 4, 1975.

Carnie and his twin sister Lorie were later found floating in a rice paddy amid the smouldering wreckage of the crash, which killed 138 people including 78 children.

“It was actually a rice farmer who found my sister and I together, both in the same shoe box,” he told AFP as he explored the site of the crash earlier this month.

The twins eventually left Vietnam on another flight, alongside thousands of other Babylift infants — who were taken from orphanages or hospitals across what was then South Vietnam. They were part of a mass exodus of people.

As it became clear Saigon would fall, America evacuated all remaining civilian and military personnel. Hundreds of thousands of Vietnamese, many associated with the South Vietnam regime, also fled.

Some criticised the Babylift operation, questioning whether the children involved were all really orphans or had just been separated from their families or given up in a desperate bid to get them out of the war-torn country.

Carnie and his sister were adopted by a Mormon family and grew up in rural Washington state. When he decided to return to Vietnam 15 years ago, the first thing that struck him was that everyone looked the same as him.

“I didn’t stand out, I wasn’t being looked at or pointed at. I’m not saying that happens in America a lot but I came from a rural town and I knew I was different,” he said.

In Ho Chi Minh City — as Saigon was renamed after Vietnam’s beloved founding president — “nobody paid attention to me, I actually liked that,” he said.

He liked it so much that he moved back to Vietnam and has lived in HCMC for the last decade, where he works for Australian University RMIT.

Carnie was told that his mother had died in childbirth. But all his original documentation was destroyed in the plane crash and he has not tried to trace his birth family since he returned to Vietnam as he says he’s made peace with his past.

“I’m comfortable with exactly who I am… therefore I don’t need to pursue anything else,” he said.

But other Babylift children are still looking for answers.

Chantal DoeckÃ«, raised in Australia by adoptive parents who responded to an advert in their local newspaper, said she began asking questions after she had her own children.

Earlier this month, she returned to the hospital in Ho Chi Minh City where she was born and tried to find out more about her mother, who gave her up shortly after childbirth. But with hardly any documentation to help her, she had little success.

“I just want to find a family member,” she told AFP blinking back tears. “There’s things I need to know.”

But DoeckÃ« said she has found another family of sorts — other Babylift adoptees, who she has connected with first on Facebook and then in Vietnam during a 40th anniversary reunion this month.

“I’m friends with so many adoptees from all over the world, and it’s fantastic,” she said. “I love every one of them I’ve met… we all call each other brother and sister.”

“Australia is where I live but this is home… a lot of the adoptees say the same things.”

For three decades — from Ho Chi Minh’s declaration of independence in 1945 to its eventual realisation with the fall of Saigon and reunification in 1975 — Vietnam endured upheaval and conflict.

“Almost every family in this country has suffered some kind of separation, with at least one person missing,” Uyen told AFP.

She hosts a hit show called “As If There Were No Separation” which tries to reunite families separated by war.

In the eight years they’ve been on air, they’ve received 70,000 enquiries — from American GIs seeking long-lost girlfriends to Vietnamese families hunting for children taken from them during the war. The show has helped thousands of people to find their relatives.

Uyen’s team have worked on some Operation Babylift cases, and she says they have a unique perspective on their positions — rarely resentful of their birth parents and accepting they were given up so they could have a better life.

Babylift adoptee DoeckÃ« agrees that the burning questions she has for her birth family do not include ‘why did you give me up?’.

“I don’t hold any grudges against my mother or father — it was wartime, what choice did they have?” she said.