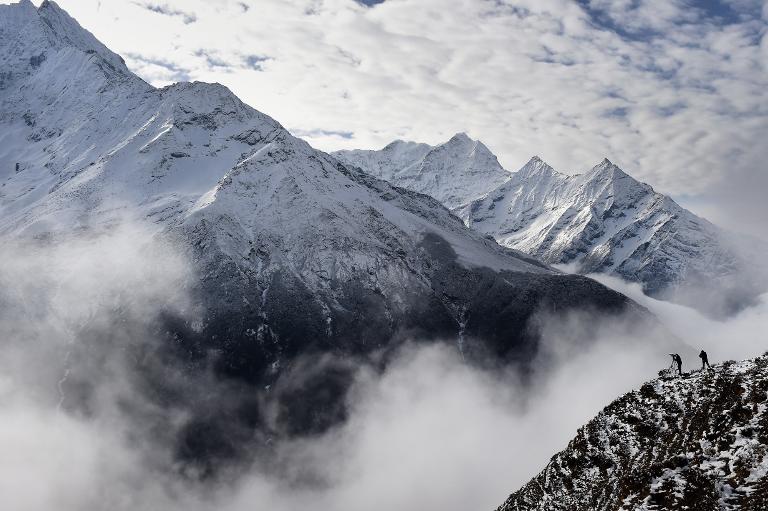 Climbers on the world’s highest mountain pleaded for help on Saturday after a massive earthquake triggered an avalanche at Everest base camp, killing at least 10 people and sparking panic.

Base camp was crowded with foreign mountaineers and their sherpa teams at the start at the climbing season when the avalanche hit, destroying camps and sending slabs of ice crashing in what was described as a “huge disaster”.

“Running for life from my tent. Unhurt. Many many people up the mountain,” tweeted Romanian climber Alex Gavan who had been preparing to ascend nearby Lhotse, the world’s fourth highest peak.

Ten people were confirmed dead on the mountain and rescue efforts were underway but heavy snow was preventing helicopters from reaching climbers, an official said.

“There might be over 1,000 people there right now, including foreign climbers and Nepalese supporting staffs. Rescue helicopters have not been able to fly because of the weather,” Gyanendra Kumar Shrestha, an official in Nepal’s tourism department, told AFP.

Just below base camp, AFP’s Nepal bureau chief Ammu Kannampilly, who is on assignment to the area, said she was caught in the earthquake and its aftershocks that ripped though large parts of Himalayan Nepal, leaving at least 1,170 people dead nationwide.

“We are both ok… snowing here so no choppers coming,” she said in an SMS. “I hurt my hand — got it bandaged and told to keep it upright to stop the bleeding.”

The avalanche and earthquake come just one year after a disaster on Everest killed 16 guides and triggered an unprecedented shut-down of the 8,848 metre (29,029 feet) peak.

Some climbers are returning this year after being forced to abandon their attempt on the summit last April during the chaos and recriminations that followed the deadliest avalanche then to ever hit the mountain.

Medics already at base camp for the climbing season were working hard to “save lives”, doctor and mountaineer Nima Namgyal Sherpa said on his Facebook page on Saturday.

“Many camps have been destroyed by the shake and wind from the avalanche. All the doctors here are doing our best to treat and save lives,” Sherpa said.

Concerns were also held for those on nearby Himalayan mountains, with climber Arjun Vajpai reporting that he was safe at Makalu base camp but that “big slabs of ice” had crashed down at camp two on that mountain.

“We had some 10 to 15 climbers including some sherpas up there and we still don’t have any confirmation reports (of) whether they are OK or not,” Vajpai said told India’s NDTV.

“It is snowing here for the past one and a half days. We haven’t been able to establish radio communication with them,” he added.

Some 700 climbers are in Solukhumbhu district that includes Everest, with 300 thought to be at base camp itself, and another 300 just below, deputy superintendent of police Chandra Dev Rai said.

Another climber Daniel Mazur, from SummitClimb, tweeted that base camp “has been severely damaged” while his team was caught at camp one. “Please pray for everyone.”

He later tweeted to say that we “have no damage and are all safe”.