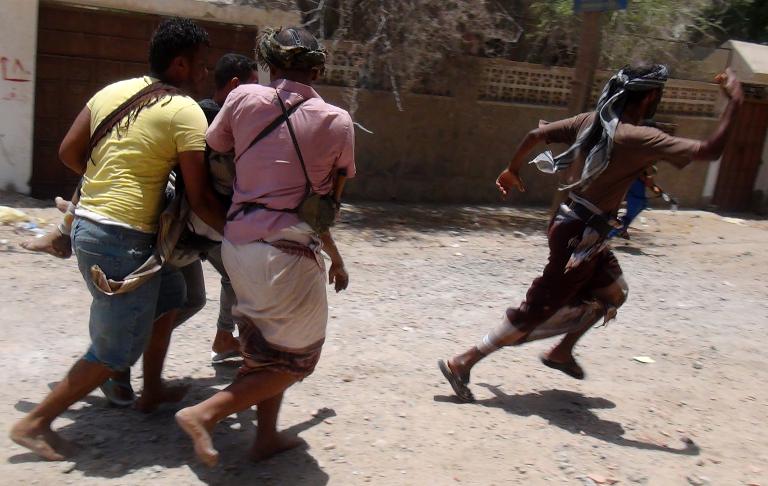 The Huthi rebels, who have overrun large parts of the country and forced Hadi to flee overseas, have demanded a complete end to a month of Saudi-led air strikes against them as a condition for UN-sponsored talks.

Sources said on Saturday that clashes had left at least 90 people dead in towns in the south of the impoverished country, strategically located next to oil-rich Saudi Arabia and key shipping routes.

Former strongman Ali Abdullah Saleh, who still holds sway over army units allied with the Shiite rebels, late Friday urged the Huthis to heed UN demands to withdraw from territory they have seized.

US Secretary of State John Kerry also called on the anti-government forces to enter into political dialogue to end a conflict that the United Nations says has killed more than 1,000 people since late March.

“This has to be a two-way street,” Kerry told reporters, adding: “We need the Huthi and we need those that can influence them to make sure that they are prepared to try to move… to the negotiating table.”

He replaces Jamal Benomar, who resigned last week following what diplomats said was sharp criticism of his performance by Gulf countries.

The fighting has raised fears that Yemen could become a new front in a proxy war between Sunni-ruled Gulf monarchies and Shiite Iran.

Tehran rejects accusations that it armed the rebels and has presented a peace plan to the UN calling for a ceasefire and the formation of a unity government.

A US aircraft carrier headed to Yemeni waters earlier this week to monitor an Iranian convoy that had raised suspicions but redeployed on Friday after the convoy turned back, Pentagon officials said.

In the key port city of Aden and in the adjacent Lahj province alone, 46 rebels died in ongoing clashes and 12 hours of intense air strikes that lasted until early Saturday, a military source close to them said.

A medic in Aden said eight pro-Hadi militiamen were killed and 32 were wounded.

The military source and pro-Hadi militiamen told AFP that coalition warships were also taking part in the shelling.

The coalition has kept up air strikes days after announcing its campaign was entering a new phase aimed at resuming the political process, delivering aid and fighting “terrorism”.

Air strikes also hit the rebel-held Al-Anad air base in Lahj north of Aden, which housed US troops supporting a long-running drone war against Al-Qaeda before the fighting forced them to withdraw.

Residents in Lahj said that the rebels have captured “dozens” of civilians they accused of helping the coalition by providing information about rebel targets.

There was also fighting late Friday in the eastern province of Marib, home to some of Yemen’s most important oilfields, army officers and witnesses said.

The 435-kilometre (270-mile) line links Marib’s Safir oilfields with the Ras Isa terminal on the Red Sea coast, and control of it has been a key goal for the rebels and their allies.

The UN says millions of people have been affected by the conflict and are struggling to access healthcare, water, food and fuel.

It estimates that at least 551 of those killed since late March were civilians and included at least 115 children.

Amnesty International wants an urgent investigation into the civilian deaths.

“Some of the Saudi Arabian-led air strikes appear to have failed to take necessary precautions to minimise harm to civilians and damage to civilian objects,” said its MENA deputy head, Said Boumedouha.

“It is crucial that independent and impartial investigations are carried out to ascertain whether violations of international humanitarian law have been committed.”

And Reporters Without Borders (RSF) said it was “extremely worried by the decline in the political and security situation in Yemen” with attacks from both sides of the conflict on media personnel.

Four employees working for Saleh’s Yemen Today television, including a presenter, were killed in Monday coalition raids on Sanaa, it said.