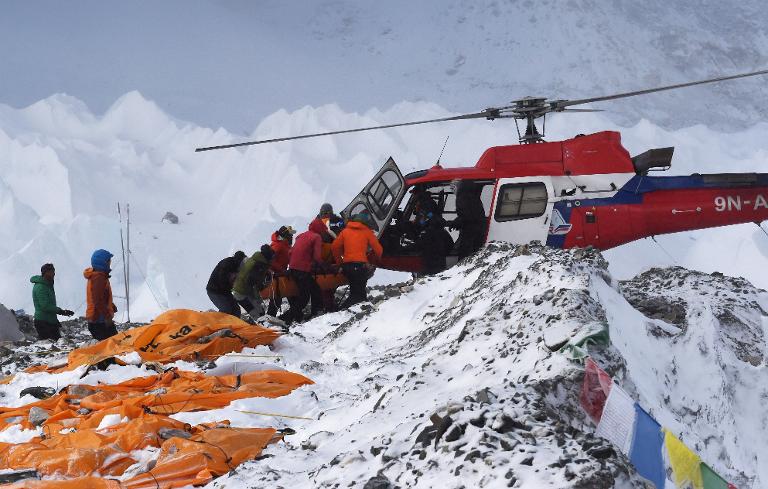 Helicopters airlifted injured climbers off Mount Everest Sunday after an avalanche killed at least 17 people, an AFP team at the scene reported, as images of the disaster showed a terrifying cloud of snow roaring towards base camp.

“People being stretchered out as choppers land – half a dozen this morning,” Kannampilly said in a text message.

Pictures taken by AFP’s South Asia photo chief Roberto Schmidt showed an enormous cloud of snow and debris cascading down the mountain as survivors recalled the horrifying moment that disaster struck on Saturday.

“I ran and it just flattened me. I tried to get up and it flattened me again,” Singapore-based marine biologist George Foulsham told AFP at base camp.

“I couldn’t breathe, I thought I was dead. When I finally stood up, I couldn’t believe it passed me over and I was almost untouched.”

A spokesman for Nepal’s tourism department, which issues the permits to climb the world’s tallest mountain, said the death toll had risen to 17 and could increase further.

“Seventeen have been reported dead so far and 61 are injured,” said Tulsi Gautam.

“Those who are able are walking down. Others are being airlifted to Pheriche.”

Ang Tshering Sherpa, president of the Nepal mountaineering association, confirmed that 17 people were known to have died and more than 60 injured.

“We don’t know their nationalities but most of them would be foreigners,” Sherpa told AFP.

Sherpa said that there were more than 800 people at different places when the avalanche, triggered by a massive earthquake, struck on Saturday lunchtime.

Many had travelled to Nepal for the start of the annual climbing season, which was cancelled last year after 16 sherpa guides were killed in what was previously the deadliest disaster in the mountain’s history.

Ropes, ice screws and snow pickets were being flown to a large number of climbers trapped above the treacherous Khumbu icefall which was the scene of last year’s disaster, he added.

Snowfalls on Saturday had thwarted efforts to airlift survivors before the skies cleared on Sunday morning.

Google executive Dan Fredinburg was among the handful of victims to have been identified so far.

He was with several colleagues who survived the tragedy, Lawrence You, director of privacy at Google, said in a blog post.

“Sadly, we lost one of our own in this tragedy. Dan Fredinburg, a long-time member of the Privacy organization… was in Nepal with three other Googlers, hiking Mount Everest. He has passed away,” You wrote.

“The other three Googlers with him are safe and we are working to get them home quickly.”

You said Google.org was contributing $1 million to the response efforts.

“Eve perished in the aftermath of the avalanche that struck the base camp area following the devastating Nepal earthquake earlier today,” the company said in a statement.

The earthquake dislodged a “huge block of ice” above base camp which sparked a “huge aerosol avalanche” that slammed into the upper section of base camp, blowing tents across the mountain, another team said on its website, adding that its climbers were uninjured.

Kanchaman Tamang, a Nepali cook who was working for the Jagged Globe tour group said the latest tragedy was particularly painful coming so soon after last year’s deaths.

“I was in the dining tent when the avalanche hit – it sent the tent flying,” he told AFP.

“After last year’s avalanche, I never worried about coming back – I told my family I work at base camp and it’s safe, not like icefall.

“The season is over – the route has been destroyed, icefall ladders broken.