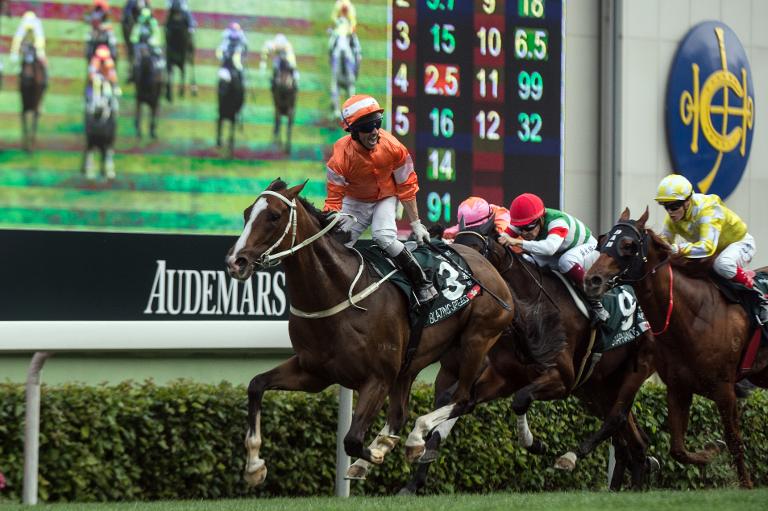 The six-year-old accelerated in the last 500 metres and overtook the early leaders to sprint to victory in the 2000-metre race.

“From the gates he jumped great… the rest was just getting him relaxed and in a rhythm and waiting for the straight,” Neil Callan who rode for renowned jockey-turned-trainer Tony Cruz said.

“Once I let him down I thought he’ll take a bit of getting,” he said.

Cruz said it was a “perfect” victory after winning the cup for the first time as a trainer.

“I had been trying very hard as a jockey. I managed a few times but now as a trainer this is the first time. Very happy about it,” he said.

Last year’s victor Designs On Rome, also from Hong Kong, slipped out of the top three, finishing forth in a pack vying for the runnerup spot.

The closely-fought second place went to Japan’s Stephanos, ridden by Yuichi Fukunaga, who edged ahead of bookies’s favourite Criterion from Australia and Designs on Rome.

“He was travelling nicely,” Fukunaga said.

“He showed a very powerful late kick when he got clear.”

Craig Williams, who rode Criterion, said: “He’s done a good job to fight on as he did in this class field. He didn’t get things his own way.”

Hong Kong-based rider Joao Moreira, on Designs on Rome, said: “I was very happy with his performance, just missing the place with the pace not strong enough for him.”

A crowd of nearly 30,000 turned out at the Sha Tin Racecourse for the annual event.

The HK$20 million ($2.58 million) race was first run in 1975 at the Happy Valley Racecourse during a visit by Britain’s Queen Elizabeth II to Hong Kong.

In 1995 it became an international event with overseas runners invited to participate and was promoted to Group 1 status in 2001.