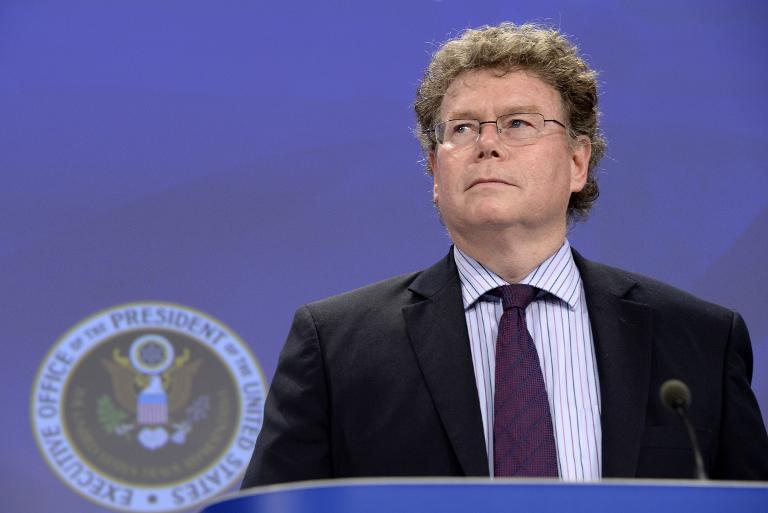 The United States criticized Friday the new European Union plan to allow member states to block genetically modified imports, following a new round of talks on the transatlantic free-trade pact.

“It is hard to square this proposal with either EU long-standing internal obligations or their aspiration for a seamless internal market,” said Dan Mullaney, the assistant US trade representative for Europe and the Middle East.

“We are still studying the proposal implications but we hope that the EU will move forward in a way that respects our decades-old rules on trade,” he added.

Mullaney was speaking at a news conference following the ninth round of US-EU negotiations on the Transatlantic Trade and Investment Partnership held this week in New York.

His remarks echoed US Trade Representative Michael Froman, who said the US was “very disappointed” by Wednesday’s EU proposal to allow the 28 member states to individually decide whether to allow the import of genetically modified organisms or food, animal feed and other products made with them.

Under current rules, if a GMO is judged safe for human consumption by the European Food Safety Agency, then the Commission must agree that it can be grown or imported without restriction in the EU. The new proposal would allow individual states to decide to block them using reasoning unrelated to risks to human and animal health and the environment.

On Friday, the Commission cleared 19 new GMO products for use in the EU, 11 of them from US agriculture giant Monsanto, including genetically modified varieties of soybeans, maize, rapeseed and cotton.

“We are pleased that the Commission is acting on long-standing biotech applications, but this does not remedy a proposal to allow EU member states to ban products deemed safe by Europe’s own scientists,” said Mullaney, the head of the US negotiating team at the TTIP talks.

Speaking at the same news conference, chief EU negotiator Ignacio Garcia Bercero said the opt-out proposal was “consistent” with the rules of the World Trade Organization and “maintains fully the role of science in the authorization process.”

“Any measure taken by the member states will have to be on a non-discriminatory base. We feel it’s a proposal which is fully compatible with our international obligations and that in no way undermines our negotiations with the United States,” Bercero said.

He said the 10th round of TTIP negotiations would be held in the coming months in Brussels and, in the meantime, negotiators would examine the two parties’ revised offers.

Among the subjects discussed in the New York meeting were fisheries and illegal fishing, other issues linked to the environment and technical barriers to trade, Mullaney said.

– Opposition on both sides –

If agreed, the TTIP would be the world’s biggest trade deal, linking about 60 percent of the world’s economic output in a market of 850 million consumers.

“You don’t have to sacrifice standards to create opportunity,” Mullaney said.

But the proposed deal has raised strong opposition in Europe, as well as in the United States. Last weekend there were demonstrations in several European and US cities opposing the plan.

The opposition is particularly high-pitched in Germany, Europe’s economic powerhouse. Of the 1.7 million signatures collected in Europe by the European activist group Stop TTIP, about one million were from Germany — nearly 10 times more than in France and 50 times more than in Italy.

The US and EU negotiators heard from stakeholders at a public comment forum Thursday.

Jean Halloran, a senior adviser at the nonprofit Consumers Union, suggested a treaty would be the worst of all possible worlds, exposing European consumers to “faulty GM cars” and US children to European toys that do not meet stricter American standards.

“We cannot pursue mutual recognition or equivalence willy-nilly,” she said.