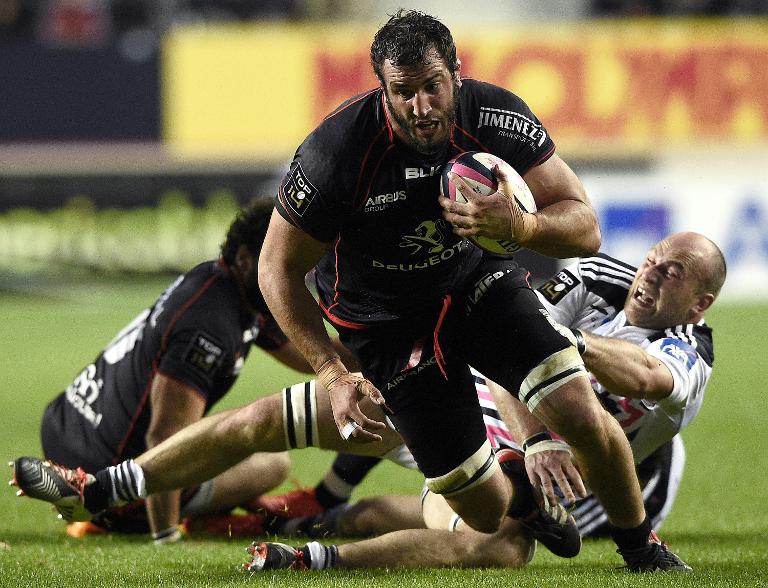 Toulouse clinched a 21-12 victory over Stade Francais in the Top 14 on Friday, capitalising on the Paris club having to play more than half the match with 14 men.

Both teams are still in the running to make the play-offs although a win for Stade would have eased the nerves of a team who have not made the end of season top six since 2009.

They were well-placed for victory on Friday when they led 9-8 late in the first period, but a red card for centre Jonathan Danty for violent play proved costly.

“Jo made an error of youth,” said Stade boss Gonzalo Quesada of his player who was punished for an ill-advised punch.

Toulouse forwards coach William Servat praised his team who are third in the standings.

“We are very happy but there’s still a long way to go in the season. Things are far from perfect and there’s a lot of work still to do,” he said.

A Jules Plisson penalty gave Stade an early lead which was quickly cancelled out by an equally confident Jean-Marc Doussain kick for 3-3.

Plisson added another penalty for 6-3 with a kick from the 22m line and pushed the advantage out to 9-3 with another successful kick, this time from 25m out on the left.

However, it was Toulouse who grabbed the first try of the evening from their first serious foray into the Stade 22.

Scrum-half Nicolas Bezy made the crucial break with full-back Maxime Medard arriving in support to go over for the score although Doussain missed the extras.

Bezy then thought he had scored his team’s second try but his long-range effort was ruled out for a dangerous high tackle by prop Neemia Tialata on Stade hooker Laurent Sempere in the build-up.

Stade centre Danty was then red-carded for punching Toulouse winger Vincent Clerc after he had been tripped by the veteran star.

Toulouse’s English import Toby Flood missed a penalty late in the first half as Stade hung on to their 9-8 lead but faced the prospect of playing the closing 40 minutes with 14 men.

South African star fly-half Morne Steyn replaced Plisson at half-time after the Frenchman suffered a shoulder injury which was later diagnosed as a dislocation.

His first significant piece of action was to push a drop goal wide of the posts.

But Stade edged ahead 12-8 when Steyn succeeded with a penalty after Toulouse had been penalised at the maul.

Flood pulled Toulouse back to within a point at 12-11 on the hour mark with a penalty and then edged his team in front for the first time on the night with a 25-metre effort for 14-12.