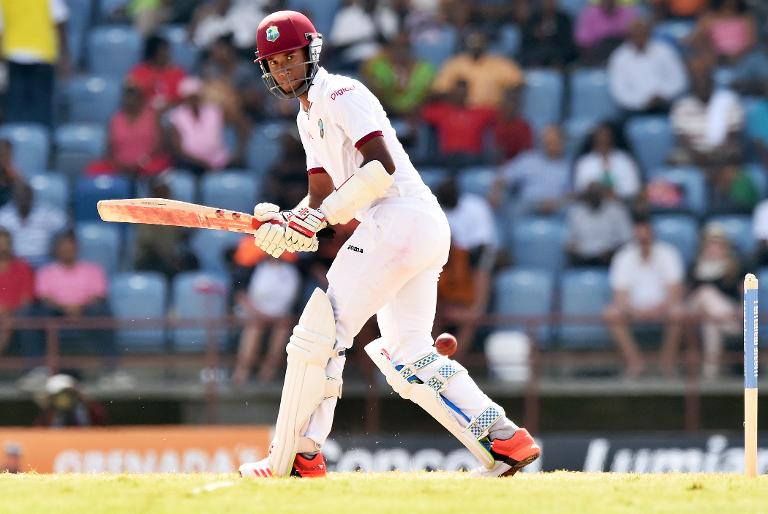 Kraigg Brathwaiteâ€™s unbeaten 101 anchored a determined West Indies second innings as the home side reached 202 for two at stumps on the fourth day of the second Test against England on Friday.

Trailing on first innings by 165 runs after the tourists were dismissed for 464 in the morning session, the home side go into the final dayâ€™s play ahead by just 37 runs with eight wickets in hand.

First innings centurion Marlon Samuels, who generated considerable media attention for his saluting send-off of all-rounder Ben Stokes following his dismissal late on the third day, will resume on the last morning on 22 alongside Brathwaite.

Known for his stodgy defiance, Brathwaite actually outscored the more flamboyant Darren Bravo for much of their 142-run second-wicket partnership.

However he returned to his cocoon of circumspection after the left-hander fell for 69 to a catch at the wicket off fast bowler Stuart Broad in the final session.

With Samuels calm and composed at the other end, the 22-year-old Barbadian duly completed his fourth Test hundred in the last nine matches, forcing seamer James Anderson through the off-side in the penultimate over of the day to reach the milestone off 228 deliveries with 11 fours.

â€œI didnâ€™t get a lot runs in the first few innings of this series so Iâ€™m really proud to make a contribution here,â€ said Brathwaite.

â€œThereâ€™s a lot of work still to be done. Thereâ€™s a full day ahead and we have to start afresh and get as big a lead as possible.â€

Brathwaite and Samuels have so far put on 57 for the third-wicket following the entertaining stand between the opening batsman and Bravo.

They had come together just before the end of the morning session when Anderson dismissed local hero Devon Smith, bowled off the inside-edge for just two.

His early strike made amends in a small way for the careless manner in which he was run out to end the England innings and leave Joe Root unbeaten on 182.

Andersonâ€™s was one of three run outs, only the third time in 138 years of Test cricket that England have had that many run out dismissals in a single innings.

Root carried on from the previous day with his positive, aggressive style of play, especially as the wickets continued to fall at the other end.

He hoisted two more sixes and stroked four additional boundaries in a commanding knock that was fully deserving of a double-hundred, except that his teammates appeared unwilling to hang around with him for any length of time.

Resuming at 373 for six and looking to take the lead closer to the 200-run mark, Rootâ€™s overnight partner, Jos Buttler, charged down the pitch at Devendra Bishoo to be stumped within the first half-hour of the morning.

Chris Jordan helped the senior batsman in putting on 39 runs for the eighth wicket before he was adjudged run out for 16 by television umpire Billy Bowden.

Broadâ€™s poor form with the bat continued with his second â€œduckâ€ in as many innings, top-edging a sweep at Bishoo for Smith to take the catch running back from first slip.

In his first bowl in Test cricket for three years, the leg-spinner finished with figures of four for 177 from 51 overs.

Last-man Anderson appeared inclined to stay with Root, who cleverly pushed the score along and manoeuvred the strike as 33 runs were added for the final wicket.

However the tailender, called through for a sharp second run, seemed to give up when a proper effort would have seen him home.