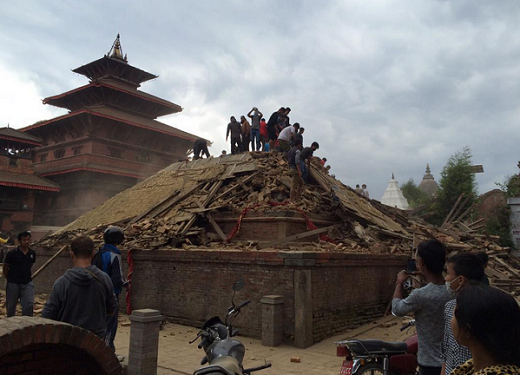 Gurgaon: A massive earthquake of 7.9 magnitude on the Richter scale rocked Nepal and North India on Saturday morning.

A second earthquake measuring 6.6 on the Richter scale followed the first, aggravating the damage in Nepal.

The third phase of aftershocks were felt in Nepal at 2:42 local time.

According to reports, 13 aftershocks were felt in a span of 2.5 hours since the 7.9 magnitude earthquake took place.

Massive tremors that lasted between 30 seconds and nearly a couple of minutes were felt throughout North India after a huge 7.5 magnitude earthquake in Nepal.

Nearly half an hour after the first tremors, aftershocks were felt again around 12:20 pm across North India.

Preliminary reports suggest that more than 650 people have died in Nepal so far and Emergency has been declared in the state.

Houses have been damaged in Nepal and there are reports of damage in the national capital of India as well. Dharahara, also called Bhimsen Tower, a nine storey tall tower at the center of Sundhara, Kathmandu has collpased and over 400 people are suspected to be trapped under debris.

According to reports, mobile networks in Nepal have been affected and network in India is clogged.

Kathmandu Airport has been shut down and all flights have been diverted to India.

Explaining Indiaâ€™s plan of action, Indian Foreign Secretary S Jaishankar said beside the two aircrafts carrying relief and aid that have already flown to Nepal (130J Hercules and C17 Globemaster), two more carrying NDRF teams will take off from Hindon and one plane will take off from Bhatinda. To support them, five helicopters were on standby in Kathmandu.

Tremors were felt in Delhi NCR, Kolkata, Pokhara, Patna, Lucknow, Jaipur and Guwahati as well. In Delhi and parts of the National Capital Region, people were seen running out of their houses after buildings shook for well over two-three minutes.

The quake triggered a landslide in the state of Sikkim but no loss of life had been reported.

Indian Prime Minister Narendra Modi too felt the earthquake and said the government is assesing the damage. The Prime Minister convened a high-level meeting in Delhi with ministers and top officials to assess the situation. He has appointed Union Minister Rajiv Pratap Rudy to handle the aftermath in the states bordering Nepal.

PM Modi spoke to chief ministers of Bihar and Sikkim amid efforts to get information about the situation after the quake.

“We are in the process of finding more information and are working to reach out to those affected, both at home and in Nepal,” he tweeted immediately after the quake.

Home Minister Rajnath Singh said the Centre has placed its Disaster Response Agencies like NDRF on alert. Two teams of the NDRF were dispatched to Bihar to help with disaster management. An emergency meeting of National Crisis Management committee headed by Cabinet Secretary was called.

People fled their offices and houses and took to the streets to minimise any and all forms of damages. In Nepal, people flocked to the streets and have blocked roads making it difficult to rush injured to hospitals.

Avalanches have been reported in Mount Everest region after the earthquake. Climbers have gone missing while some are stuck in the camp.

However, the Indian Army team that was on a cleaning mission at Mount Everest is reportedly safe.

Meanwhile, two deaths from Darbhanga and one death each from Saran and Shivhar district of Bihar were reported due to wall collapse.

Bihar Government has issued high alert for next 48 hours. State government has also asked the people residing in high rise buildings, old buildings, Kaccha buildings and all such building which has received damage in the earthquake to stay alert.

Five teams of NDRF have been rushed to North Bihar districts of Supaul, Madhepura, Darbhanga, Sitamarhi and Madhubani for rescue operations.

Historically, the region has been the site of the largest earthquakes in the Himalayas. A 2005 earthquake in Kashmir and a 1905 earthquake in Kangra resulted in a death toll of more than 100,000 people, according to the United States Geological Survey.