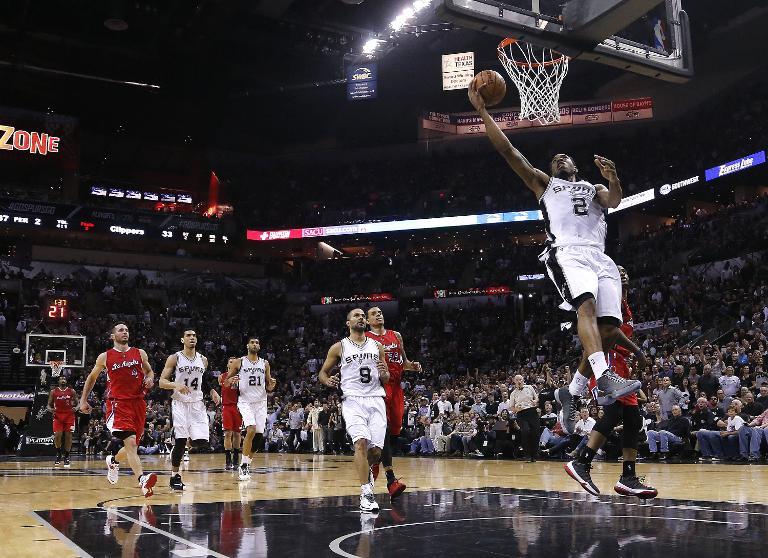 Kawhi Leonard showed why he is worthy of being named the defensive player of the year, putting his complete game on display for the San Antonio Spurs.

Leonard scored a career-high 32 points to carry the Spurs to a 100-73 win over the Los Angeles Clippers and a 2-1 lead in their best-of-seven Western Conference playoff series.

In the other playoff contests Friday, the Houston Rockets and Washington Wizards also won to take commanding 3-0 series leads. No team in NBA history has ever lost after taking a 3-0 lead in a best-of-seven series.

Leonard not only anchored the Spurs’ defense but he wasted no time putting his stamp on the game offensively.

He finished 13-of-18 shooting with three steals and two blocks, playing less than two minutes in the fourth quarter with the game well in hand. Leonard was named the league’s top defensive player earlier Friday.

Boris Diaw came off the bench to finish with 15 points and six rebounds in the win. Two-time MVP Tim Duncan, who scored 28 points to carry the Spurs to their overtime win in game two, finished with just four points on two-of-six shooting from the field.

The Spurs will look to take a commanding 3-1 series lead in Sunday’s game four.

The Clippers won game one in convincing fashion and lost a close contest in game two, but they were overmatched in their first game in San Antonio.

Chris Paul committed six turnovers and finished with just seven points. The Clippers’ reserves also struggled as Jamal Crawford missed all but one of the 11 shots from the field he attempted. The reserves had just 30 points on 41 shots.

James Harden and Dwight Howard set playoff career highs as Houston beat the Dallas Mavericks 130-128 and are now just one victory away from advancing to the second round.

Harden netted 42 points, Howard snatched 26 rebounds for the Rockets, who trailed by 13 in the first half before storming back. Harden scored 16 in third quarter and knocked down a jumper with 13 seconds left that helped seal the win.

“I have seen it a lot this year,” said Houston coach Kevin McHale of Harden. “The guy’s played fantastic and a big game when we needed him to play well, he has. He has stepped up.”

Houston can close out the series with a victory Sunday back at American Airlines Center.

Paul Pierce was the catalyst down the stretch for the Wizards who are on the brink of reaching the Eastern Conference semi-finals after beating the Toronto Raptors 106-99.

Pierce scored 11 of his 18 points in the fourth quarter, including a couple of key three-pointers.

Marcin Gortat had 24 points with 13 rebounds, John Wall tallied 19 points and 15 assists and Bradley Beal added 16 points for Washington, who like the Rockets will look to close out the series on Sunday.