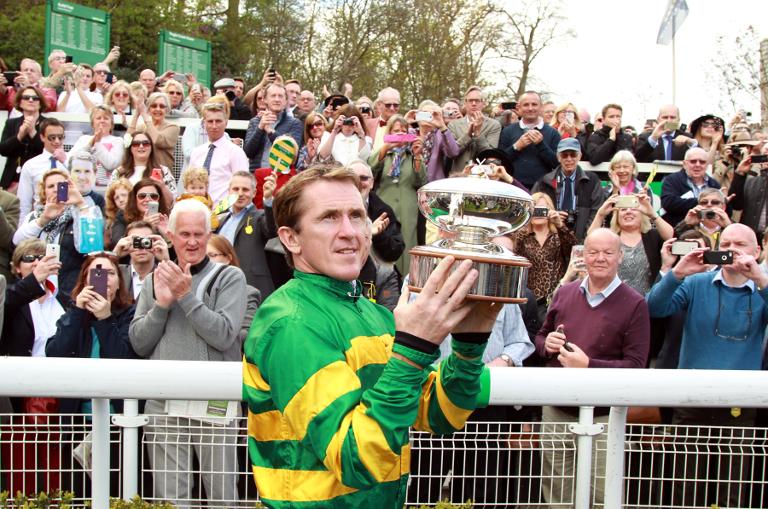 The 40-year-old Northern Irishman — whose own box office appeal drew a capacity 18,300 crowd to the racecourse — was cheered to the rafters from the moment earlier in the day when he walked through a guard of honour of his colleagues to accept the Jockeys Championship trophy for a 20th and final time.

“It’s just amazing that all these people should come here to see me. I feel really privileged,” said a tearful McCoy.

“I will never forget this day.

“It is way beyond my expectations. I feel very honoured and privileged to have had a great way of life in last 25 years.

“So blessed to live your life like I have. I always say to my colleagues enjoy it while you can as you don’t know how long it is going to last,” added McCoy.

McCoy’s words on the fragility of their careers had special significance as the first thing he will do next week is fly to Ireland to see Robbie McNamara and his cousin JT.

Robbie has lost the feeling in his legs after a fall earlier this month while JT was paralysed in a crashing fall at the Cheltenham Festival in 2013.

McCoy, who will then take a rare 10 day holiday in Barbados, said his relationship with his retainer JP McManus had been a special one.

“I was very honoured when he asked me to ride for him,” said McCoy.

“I started off as his employee and as time has gone on we have become really good friends. Our wives became concerned when on a couple of St Valentine nights we were in London together!!

“I always found the people I worked with were very loyal and that is very important in life.”

The final race of the McCoy era, which has seen him win a record 4,382 races including two Cheltenham Gold Cups and a Grand National, was won by Richard Johnson, who finished runner-up to him 15 times in the jockeys championship.

However, the Englishman, considered the man most likely to succeed McCoy as champion jockey next year, was sad rather than relieved his nemesis would no longer be part of the scene.

“It has been a real honour to sit alongside this fellow all these years,” said Johnson also fighting back the tears.

McCoy’s long-suffering wife Chanelle — who has seen her beloved break every bone in his body and lose all his teeth — admitted retirement for him would take some getting used to.

“He’s going to miss it dreadfully,” she told Channel Four.

“There will be lonely and empty days ahead of him but he will be alright,” added Chanelle, who with McCoy had two children daughter Eve and son Archie through IVF treatment as the constant battle with his weight had reduced his sperm count.

McManus, in whose colours McCoy finally won the Grand National on Don’t Push It in 2010 costing the bookmakers an estimated Â£50million, said McCoy was a man apart.

“When you ask him to do something he is like the man having bacon and egg for breakfast, both the hen and the pig is involved and that is AP.”

McCoy’s final moments prior to the final ride were as ever taken up by signing autographs for his colleagues and then being mobbed on his way to the paddock, but still pausing to sign the racegoers programmes.

A great cheer emanated from the stands as the horses went out for the second circuit and they reached a crescendo as it looked like he could come and deliver a perfect final fairytale.

It wasn’t to be but McCoy was still hailed by the fans who included Oscar-winning actress Judy Dench.

“It’s great to be able to meet him and say: ‘you’re a legend’,” she told Channel Four.