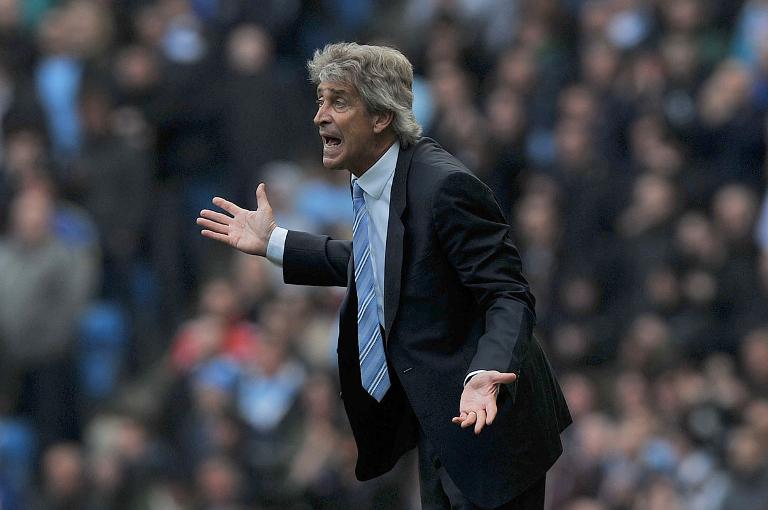 Manuel Pellegrini insists Manchester City are still heading in the right direction under his leadership despite surrendering the Premier League title without a fight.

Pellegrini’s side have limply allowed the English crown to slip from their grasp after falling 12 points behind leaders Chelsea with only five games remaining.

City also struggled once again in the Champions League, barely making it out of the group stages before bowing out in tame fashion against Barcelona.

After slumping down to fourth place, they must focus on securing enough points to hold off fifth placed Liverpool in the race to qualify for next season’s Champions League.

Inevitably Pellegrini’s future has been called into question, with Jurgen Klopp, who will leave Borussia Dortmund at the end of the season, among the names linked with his job.

But the Chilean is adamant City have shown enough progress in his two-year reign to warrant another season in charge.

“I think this club is growing every year. For me you are never satisfied if you do not win the title but if you cannot win it you must try to be as near the top of the table as you can,” Pellegrini said ahead of Saturday’s home clash with FA Cup finalists Aston Villa.

“It is difficult when you have a stamp put in your chest that you must be the best because you are the only club that has money. It is difficult for this club to fight against that.

“We try to do the best we can. I don’t think it is so, so bad what this club is doing, and not just in my two years.”

On Sunday, Arsenal manager Arsene Wenger will hope to make it 13th time lucky against Jose Mourinho as his side attempt to delay Chelsea’s coronation as Premier League champions.

Wenger has never prevailed against Mourinho in 12 attempts and even if he redresses that statistic at the Emirates Stadium, it is unlikely to prevent Chelsea from claiming the title.

Having recorded an efficient 1-0 win over third-place Manchester United last weekend, Chelsea are 10 points clear of Arsenal at the top of the table with six games remaining.

Victory would leave them needing three points from next Wednesday’s trip to Leicester City, currently embroiled in a relegation battle, to claim a first league crown since 2010.

But while the championship seems destined for Stamford Bridge, Arsenal have drawn encouragement from a run of nine consecutive wins, including an FA Cup semi-final defeat of Reading that took the holders into the final.

Sunday’s derby will see Chelsea midfielder Cesc Fabregas return to the club where he previously spent eight years — including three as captain — and Wenger hopes he will be spared a hostile reception.

“I want every player to be respected, and Cesc Fabregas when he comes to the Emirates on Sunday to be respected like he deserves,” said the Frenchman, who clashed with Mourinho on the touchline in October’s reverse fixture.

Eden Hazard netted Chelsea’s winner against United — his 18th goal of the season — and is hotly tipped for honours in Sunday’s Professional Footballers’ Association (PFA) awards.

“He is flying. In my opinion it’s been the best season of his career,” team-mate Branislav Ivanovic told the Chelsea website.

“He’s the guy who, when you pass him the ball, you just have to leave him alone. He will do everything. He’s something different.”

Hazard’s strike ended United’s six-game winning run and saw their lead over City trimmed to a point as the champions won 2-0 at home to West Ham United.

United travel to Everton on Sunday, a year on from a 2-0 defeat at Goodison Park that preceded David Moyes’s dismissal as manager.

Liverpool’s hopes of a top-four finish are fading fast, with City seven points above them in the standings, albeit having played a game more.

But news of Jordan Henderson’s new long-term contract has alleviated some of the gloom around Anfield ahead of Saturday’s game at West Bromwich Albion.