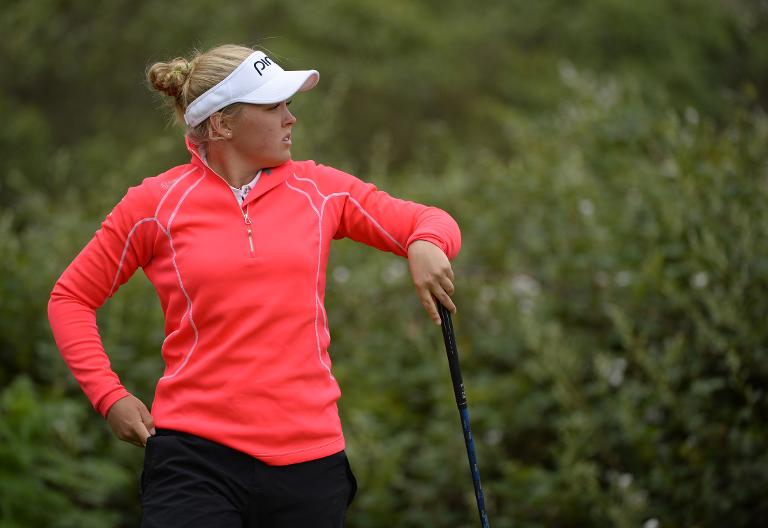 Canadian teenager Brooke Henderson shot a tournament-record seven-under 65 to grab a two-shot lead after the second round of the LPGA Tour’s Swinging Skirts tournament.

The 17-year-old Henderson finished 36 holes at nine-under 135 at the Lake Merced Golf Course.

“It’s pretty cool,” Henderson said about setting the record. “This golf course is tough, and the conditions are even tougher.

“On my back nine, the greens really started to firm up and got a little bit faster. You really have to be careful where you place it on the greens.”

Henderson broke Stacy Lewis’ (2014) record of 138 by three shots. Henderson is looking for her first victory on the US LPGA Tour.

Asked if she was ready to win her first big tournament, Henderson said, “I think I’m ready.

“Yeah, 17 is young. As you’ve seen with Lydia Ko and Lexi Thompson and even Jessica Korda, there are a lot of great names that have been able to do it. I’m hoping that I’m one of them.”

First round leader and defending champ Ko celebrated her 18th birthday Friday with a even-par 72 to finish tied for fifth.

Choi Na-Yeon used a four-under 68 to seize sole possession of second place. Choi finished two rounds at seven-under 137. Japan’s Sakura Yokomine (67) and China’s Feng Yueer (68) are one shot further back and tied for third at six-under.

Henderson started on the back nine and wasted no time moving up the leaderboard.

After making a par at the 10th, Henderson birdied two of her next three before rolling in an eagle putt at the par-five 14th. Through five holes, Henderson was at four under for the day.

Following a trio of pars from 15, Henderson drained birdies at the 18th and number two as she made the turn. She stumbled to her first and only bogey of the week at the par-four fifth.

But Henderson responded nicely by making back-to-back birdies at six and seven to get to nine-under. She finished up with a pair of pars to end at 65.