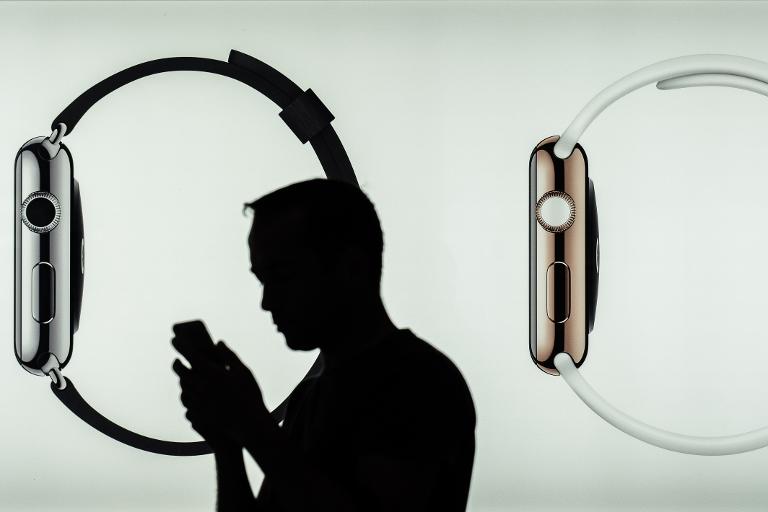 The Apple Watch made its global debut on Friday in a launch aimed at making the California giant the overnight leader in wearable technology.

The event was noticeably low key compared with the fanfare of other Apple product launches: None of the smartwatches were available in Apple stores in New York or around the world, meaning no long queues.

Walk-up sales of the wristwear were limited to specialized and luxury boutiques in the nine launch countries.

Some customers were expected to get delivery of the Apple Watch if they were among the first to pre-order when Apple opened online sales on April 10.

At the Apple flagship store on New York’s Fifth Avenue, it was just another day.

“Is it launching today? Really?” said Swiss national Francesco Maisano at the New York store, adding that he would have liked to take one home to his country, where no sales data has been announced.

Also in New York, Elizabeth Stone said she didn’t mind the delay — understanding that Apple will not be shipping most watches before June.

“Good things come to those who wait,” she said. “It makes it more exciting, it’s like Christmas.”

In Paris, online chatter that luxury boutique Colette might have unclaimed watches produced a line of some 200 people outside its doors Friday morning.

Some Parisian enthusiasts — perched atop stools or on lawn chairs — said they began forming a line outside the ritzy central Paris shop on Wednesday afternoon.

Twitter users spread word that a store in Tokyo’s Akihabara quarter had deliveries of the watch, allowing several customers to walk away with Apple Watches of their choice — without waiting in line.

“I’m happy. I want to wear it all the time,” said Makoto Saito, 23, wearing a giant cardboard Apple Watch on her head.

While most buyers at the Softbank store in Tokyo’s posh Ginza district pre-ordered the watch, 39-year-old programmer Yuichiro Masui said he had been waiting outside since Thursday night.

“I want to try the fitness application because I’m concerned about my weight,” he said.

But official Apple outlets in the Japanese capital were quiet, with none stocking the smartwatch.

In China, new owners went online to give their views.

“It is awesome! The Apple ecosystem is so strong, a large batch of applications can be used on the Apple Watch,” said one happy recipient on the country’s Twitter-like Sina Weibo.

The watch connects wirelessly to a user’s iPhone for messaging, calls and apps, with prices from $349, and a limited-edition gold version costing $10,000. It was available in the US, Canada, China, Britain, France, Germany, Australia, Japan and Hong Kong.

Accompanying the event was the launch of dozens of new apps for the device: from weather forecaster Accuweather, retail giant Amazon and newspaper group Tribune Publishing, to name a few.

Amid the enthusiasm, a note of caution came from the US National Safety Council, which warned against using the watch while driving.

“Drivers wearing smartwatches can call, text, email and surf the web, but the watch also vibrates when it receives a notification,” the group said in a statement.

“That vibration could be very difficult to ignore; a natural impulse will be to look at our wrist. This could take a driver’s eyes off the road and mind off the drive — a recipe for disaster.”

The long-term prospects are unclear for Apple’s newest product, which competes against a number of smartwatches powered by the Android operating system.

“For Apple’s watch to really kick-start this category, it would need to tackle three issues: the design, the relevance/applicability and the price. If Apple get the first two right, the price issue would take care of itself,” said Imran Choudhary, telecom analyst at Kantar Worldpanel.

But many analysts say Apple will become the overnight leader in the nascent segment.

The device “will bring new attention and investment to the app ecosystem,” especially in categories such as travel and fitness, the research firm said.

“Wearables have been touted for a long time but Apple is truly bringing the category to the masses with the early success of the Apple Watch,” said Joshua Martin at the consultancy.

“Companies in many categories — such as travel and health and fitness — will be forced to integrate applications more tightly with their short- and long-term strategy, product development, and marketing in order to resonate with Apple Watch owners.”