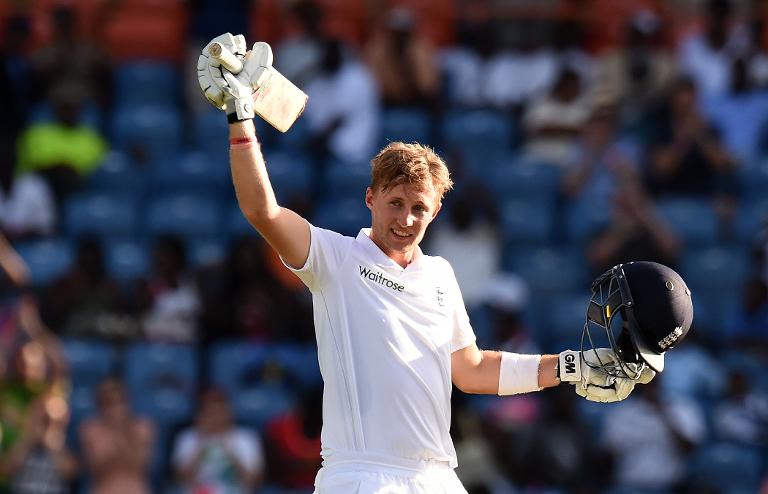 Joe Root’s sixth Test hundred piloted England to a position of control at 373 for six in reply to the West Indies first innings total of 299 at stumps on the third day of the second Test on Thursday.

Coming in the wake of half-centuries in the drawn first Test in Antigua, the 24-year-old Yorkshireman’s unbeaten 118 extended his excellent run of form and ensured the tourists made good use of the first sun-drenched day of the match.

They will go into the penultimate day ahead by 74 runs with Root and Jos Buttler seeking to build on that advantage in the quest for the victory on the last day that escaped them last week at the Sir Vivian Richards Stadium.

“I’m feeling good, the movement’s good, so obviously you’ve got to cash in at times like this and score as many as you can while things are going so well,” said Root.

“We’ve got plenty of batting left in that dressing room and we’ll want to get a big lead and only bat once.”

Root’s commanding knock, his first Test century outside of England, came off 125 deliveries and was embellished by 13 fours and two sixes.

He dominated a 165-run fourth-wicket partnership with Gary Ballance and almost knocked the fight out of the West Indies after fast bowler Shannon Gabriel made two important strikes in the early afternoon to give his team hope.

Ballance, the doughty left-hander, was prepared to stay in Root’s slipstream, cruising to 77 before falling to a careless shot within sight of his second hundred in successive Tests.

He dragged a wide delivery from part-time spinner Marlon Samuels onto the stumps and then watched from the pavilion as new batsman Moeen Ali ran himself out without scoring.

Ben Stokes didn’t last long, hoisting a Devendra Bishoo long-hop to Jermaine Blackwood on the midwicket boundary to take some of the gloss off Englandâ€™s effort as they lost three wickets for 35 runs near the end of a day.

Earlier, Alastair Cook’s quest for a first Test century in more than two years ended on 76 as he became the first of two wickets for Gabriel, playing on to the burly fast bowler 40 minutes after lunch.

He wasted no time in setting about the bowling and the summoning of the second new ball by West Indies captain Denesh Ramdin after 85 overs only succeeded in accelerating the scoring.

They put on 125 for the first wicket, England’s first century opening stand since the Test against New Zealand in Dunedin in March, 2013, before the reintroduction of Bishoo brought the breakthrough just before lunch.

Keen to attack the leg-spinner, Trott, on 59, drove at a full-length delivery but only succeeded in getting an edge for Blackwood to take a good catch at second slip.

That strike hinted at further success for the Guyanese, but like the faster bowlers, he struggled for consistency in line and length, even delivering two of the 18 no-balls among the 30 extras conceded by an increasingly indisciplined unit.