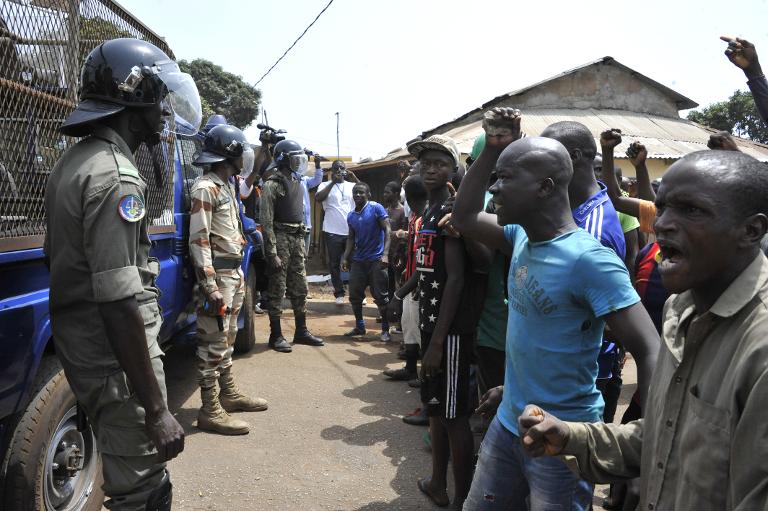 Security forces in Guinea killed a protester and wounded four others, witnesses said, as opposition supporters clashed with police at anti-government rallies in its largest towns and cities.

The violence broke out after the opposition called for a day of protest against the restive west African nation’s hotly disputed election timetable, capping two weeks of riots in the capital Conakry.

A hospital source in Labe, the country’s second-largest city and an opposition stronghold, said the victim “was beaten with batons by security forces”.

The protester’s body was carried to a regional hospital by fellow activists who cried “God is greatest”, “death to the dictator” and “justice for all”, witnesses said.

The government confirmed the death of Ousmane Bah, 28, in a statement and said 14 people were injured, including 11 police officers. Police had made 93 arrests, the statement said.

Violence between opposition activists and police in Conakry has left several dead in the past two weeks, but the demonstrators vowed they would continue holding unauthorised rallies against President Alpha Conde.

As the situation calmed on Thursday evening, opposition spokesman Aboubacar Sylla described the protests as “a total success”, but admitted the toll they took on supporters was “very heavy”. Nevertheless, demonstrations would continue, he added.

Clashes broke out at midday between demonstrators and police in the suburbs of Conakry, with at least five civilians sustaining minor injuries, witnesses told AFP.

Around the same time the government reported a “quasi-normal” security situation over most of the country but added that there had been minor violence in Conakry and Labe.

“The opposition has once again defied the law and endangered the lives of our people,” it said in a statement.

Demonstrators and police also clashed in Kindia, Guinea’s third-largest city and the headquarters of the country’s military, 130 kilometres (80 miles) east of Conakry. Local media said a policeman and a protester had been wounded.

Dozens of opposition supporters were arrested, according to a security source and Diallo’s party, the Union of Democratic Forces of Guinea.

In the central town of Mamou, where around a dozen police officers were wounded in clashes earlier this week, security forces blocked the road leading to the headquarters of the main opposition party, witnesses said.

Activists in Dinguiraye, northern Guinea, vowed that they would rally despite a large contingent of security forces who had been brought in from the eastern region of Kankan, a government stronghold.

The unrest came a day after Conde had said the country’s constitution ruled out the kind of changes to the election timetable sought by opposition supporters.

“The Guinean constitution requires that presidential elections take place on a precise date,” Conde told reporters after a meeting with French President Francois Hollande in Paris.

“We will do everything possible to maintain order in the republic.”

Guinea’s opposition boycotted parliament in March in protest over the timetable for the presidential ballot, accusing Conde of using the Ebola epidemic as an excuse to postpone voting.

The opposition had called for the local elections — originally planned for the beginning of 2014 — to be held before the October presidential vote but they are not due to take place until March 2016.

Diallo said the motivation behind the president’s refusal to budge on the timetable was fear of defeat if the local vote was brought forward.

“It is not as easy to commit fraud in local elections as it is in national ones — he would not be able to justify hijacking the vote,” the opposition leader told AFP.

One of the poorest countries in the region despite vast potential for mineral exploitation, Guinea was run by a succession of autocratic rulers after gaining independence from France in 1958.