Home Politics Made a mistake should have called off rally: Kejriwal 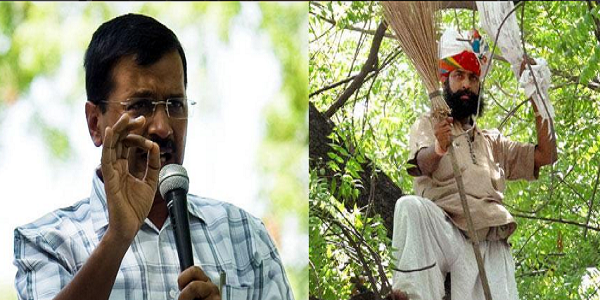 New Delhi:Â Delhi Chief Minister Arvind Kejriwal on Friday acknowledged that he had made a mistake by continuing to speak at his party’s ‘Kisan Rally’, even as farmer Gajendra Singh had committed suicide, admitting that he should have called off the rally.

“Two days ago, during the Aam Aadmi Party’s ‘Kisan Rally’ at Jantar Mantar, a farmer committed suicide. It was a very painful event and personally for me it was more painful as I have not experienced anything like this ever before in my life. When his body was brought down, we got to know he was still alive and he was rushed to the hospital by Aam Aadmi Party volunteers. After that I started to give my speech and said ‘I don’t feel like talking’,” Kejriwal told news agency ANI.

“I was supposed to speak for an hour, but somehow tried to wrap it up in 15-20 minutes. I think, yes, this was my mistake. Maybe I should not have spoken at that time. But, I could not make it out at that time. I apologise if anyone’s sentiments have been hurt by it,” he added.

Kejriwal further said that the debates surrounding the issue over the past two days have not helped solve the issues of the farmer.

“Whatever is going on from last two-three days is not correct. The police and the magistrate are conducting their respective enquiries. Whoever is the culprit should be punished. Punish them, but bring back the focus of debate to the fact that farmers of the country are committing suicide,” he said.

Kejriwal also clarified that no AAP leader made any announcement from stage on the man because it would have led to chaos. Â

“When he was brought down, we heard he was alive. He was taken to hospital. I started speaking…I said that I didn’t feel like talking. Instead of one hour, I spoke only for 10 minutes,” Kejriwal said, claiming that he had spent two sleepless nights.

He, however, went on to denounce the “drama” over the incident and said politicians and the media should focus on farmer suicides and how to stop them.

Reacting to his apology, the BJP’s Nalin Kohli said, “He should reflect on that day. We don’t accept the apology. He is trying to justify himself.”Â

“What a bundle of contradictions, this entire situation is. When it comes to Kejriwal, his entire politics has been focused only on allegations, acquisitions and somehow finding excuses for the lack of work they do. He is almost theÂ king of blame gamesÂ because that is what he has done consistently,” Kohli said.

Gajendra had committed suicide on Wednesday by hanging himself from a tree during an Aam Aadmi Party rally against the Land Acquisition Bill in New Delhi.

As per reports, a suicide note was found that revealed the farmer, who had three children, was banished from his house after his crop was damaged. He took the extreme step because he had no means of support his family.