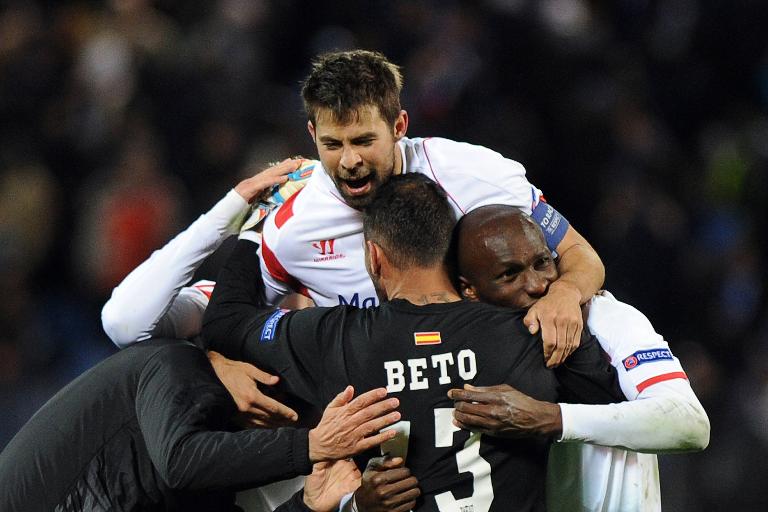 Holders Sevilla sealed their place in the semi-finals of the Europa League on Thursday after a dramatic 2-2 draw with Zenit St Petersburg in Russia saw them progress 4-3 on aggregate.

The Spanish side threw away a commanding lead in the tie by conceding two second-half goals, and the match looked to be heading for extra time until substitute Kevin Gameiro popped up with five minutes remaining.

The French striker, whose penalty in the shoot-out against Benfica in last season’s final secured the trophy for Unai Emery’s side, beat Yuri Lodygin with a crisp strike to silence the Petrovski Stadium and take Sevilla into Friday’s draw.

Having won 2-1 in the first leg in Spain a week ago, Sevilla were in a fantastic position in the tie after Carlos Bacca converted a penalty in the sixth minute for his 22nd goal of the season after Vitolo went down under the slightest of contact from Luis Neto.

Zenit now needed to score twice without reply just to force extra time but they were given hope just after the interval when Jose Rondon netted after Beto fumbled Oleg Shatov’s cross.

And then Brazil star Hulk squared the tie on aggregate with an incredible strike from 40 yards out wide on the right that hit the underside of the bar and landed just over the line.

Italy will have two representatives in the semi-finals after Fiorentina and Napoli both sealed their progress.

After scoring a late away goal in Kiev last week to hold Dynamo Kiev to a 1-1 draw, Fiorentina won the return 2-0 against the Ukrainian giants thanks to a goal in each half from Mario Gomez and substitute Juan Manuel Vargas.

Vincenzo Montella’s side battered the visitors in the opening stages with Gomez having an effort disallowed for offside, Marcos Alonso hitting the bar and Gomez and Mohamed Salah both being denied by Olexandr Shovkovskiy.

Dynamo were then reduced to 10 men five minutes before the interval as Dutchman Jeremain Lens was shown a second yellow card after being harshly adjudged to have dived on the edge of the box.

Moments after that Gomez diverted a driven ball by Joaquin into the net to score his 40th goal in European competition, one more than his illustrious compatriot Karl-Heinz Rummenigge.

Despite their one-man advantage, nerves got the better of Fiorentina in the second half and they had to wait until the fourth minute of added time to make sure of the victory as Peruvian forward Vargas fired home from a tight angle.

The Florence outfit are through to a first European semi-final since reaching the last four of the UEFA Cup in 2008 and they are joined by Napoli, whose 2-2 draw at home to Wolfsburg saw them progress 6-3 on aggregate.

After a big win in Germany last week, Rafa Benitez’s side increased their aggregate lead as Gonzalo Higuain set up Jose Callejon and Dries Mertens to score second-half goals at the San Paolo.

Timm Klose and Ivan Perisic scored to earn Wolfsburg a draw on the night and rescue some pride.

In Kiev, Dnipro made it through to a first ever European semi-final as a late goal from substitute Yevhen Shakhov sealed a 1-0 win over Club Brugge.

After a goalless first leg last week, the tie appeared to be heading for extra time until Shakhov struck in the 82nd minute to inflict a first defeat on the Belgians in 16 games in the competition this season.

With Dnipro progressing, Zenit’s exit cures something of a headache for UEFA, who have been keeping Russian and Ukrainian sides apart in continental competition ever since the conflict broke out in eastern Ukraine last year.