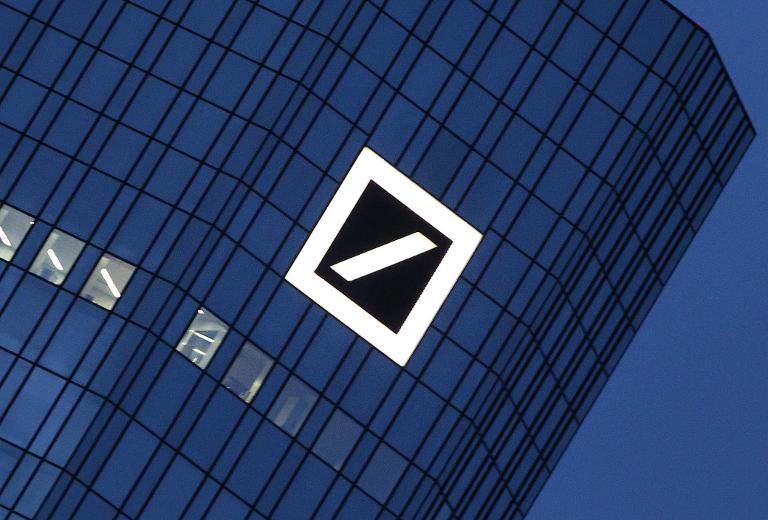 “Deutsche Bank secretly conspired with its competitors to rig the benchmark interest rates at the heart of the global financial system,” said US Assistant Attorney General Bill Baer of the Justice Department’s antitrust division.

“Deutsche Bank’s misconduct not only harmed its unsuspecting counterparties, it undermined the integrity and the competitiveness of financial markets everywhere.”

Germany’s biggest bank agreed to pay the record fine for manipulating the London InterBank Offered Rate, used to peg millions of interest rate-sensitive contracts and loans around the world, to boost its trading positions.

Deutsche Bank’s London subsidiary DB Group Services, where most of those who manipulated the rate worked, agreed to plead guilty to one US count of wire fraud in the case.

Deutsche Bank will pay a $775 million penalty to the Justice Department, the largest criminal penalty yet imposed in the LIBOR resolutions, and agreed to a corporate monitor, the first time that has been imposed.

The monitor is part of a US three-year deferred prosecution agreement in which Deutsche Bank admitted its role in rigging LIBOR and participating in a price-fixing conspiracy with other banks by rigging the Japanese yen LIBOR.

Deutsche Bank will continue to cooperate in the Justice Department’s continuing investigation.

The deal allows Deutsche Bank to keep its operating license in the United States. The bank’s New York branch has more than 1,700 employees and total assets exceeding $152 billion.

Deutsche Bank is the sixth bank to resolve LIBOR charges in the long-running US investigation into the scandal, which emerged in 2012 when Barclays was fined by US and British regulators for rigging the benchmark rates.

The bank’s misconduct occurred from at least 2003 through early 2011, according to the Justice Department.

For Britain’s Financial Conduct Authority, Deutsche Bank will pay a record fine of 227 million pounds for manipulation conducted between 2005 and 2010.

“Deutsche Bankâ€™s failings were compounded by them repeatedly misleading us,” said Georgina Philippou, the FCA’s acting director of enforcement and market oversight.

Leslie Caldwell, the US assistant attorney general in charge of the criminal division, said that the bank’s cooperation at the outset of the government’s investigation was “not full and complete” but subsequently improved.

A 2007 email showed a Deutsche Bank employee bragging about LIBOR manipulations by the Frankfurt and London offices to the head of the bank’s global finance unit: “HAVE U SEEN THE 3MK FIXING TODAY? THAT WAS AN EXCELLENT CONCERTED ACTION FFT/LDN. CHEERS.”

In a September 2006 exchange, the bank’s London desk head pleads with an external banker at Barclays for a reduction in the EURIBOR rate, and apparently got it.

Deutsche Bank said it would book an additional charge of 1.5 billion euros ($1.6 billion) in the first quarter for litigation costs related to the LIBOR case and other issues.

“We have disciplined or dismissed individuals involved in the trader misconduct; have substantially strengthened our control teams, procedures and record-keeping; and are conducting a thorough review of the bank’s actions in addressing this matter,” said co-chief executives Jurgen Fitschen and Anshu Jain in a statement.