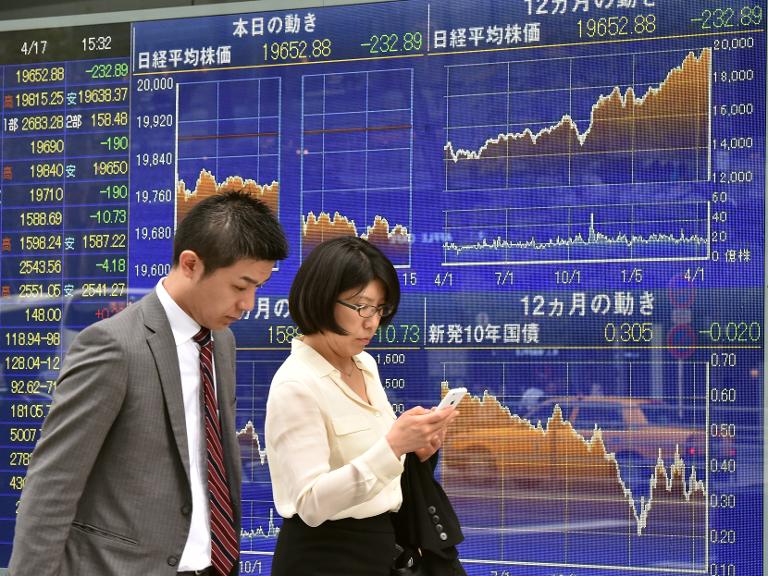 Most Asian markets rose Friday, taking a positive lead from Wall Street where the Nasdaq broke a 15-year-old record high, while the euro ticked higher ahead of a key eurozone meeting to discuss Greece’s debt crisis.

Oil prices edged down after another rally that has been fuelled by worries that unrest in Yemen could hit Middle East supplies.

With few catalysts in Asia, investors tracked their US counterparts, where the tech-heavy Nasdaq passed its previous record high set at the peak of the dot-com boom.

Thursday’s advances came despite official data showing fresh claims for US unemployment insurance benefits edged up marginally, while sales of new homes plunged in March after a sharp rise in February.

The figures will further muddy the waters for the Federal Reserve as it debates when to hike record-low interest rates.

On forex markets the dollar eased to 119.50 yen from 119.55 yen in New York late Thursday as expectations for an early summer hike narrow following several below-par US readings lately.

However, the single currency is still up from the $1.0703 and 128.28 yen in Tokyo earlier Thursday ahead of the meeting of eurozone finance ministers in Latvia’s capital Riga later in the day to talk about Greece.

The Eurogroup meeting comes with Athens running out of cash and struggling to reach a bailout reform deal with its creditors that will unlock billions of euros to service its debts to avert a default and likely exit from the eurozone.

However, Kathy Lien of BK Asset Management said that while there is optimism an agreement can be reached “in reality the rebound in (the euro) reflects short covering ahead of the meeting”.

Oil prices dipped on profit-taking after sharp gains Thursday that came as a Saudi Arabia-led coalition renewed airstrikes against rebels in Yemen.

While Yemen is not a major producer, it sits on a key strategic entry point into the Red Sea through which some 4.7 million barrels of oil pass each day.