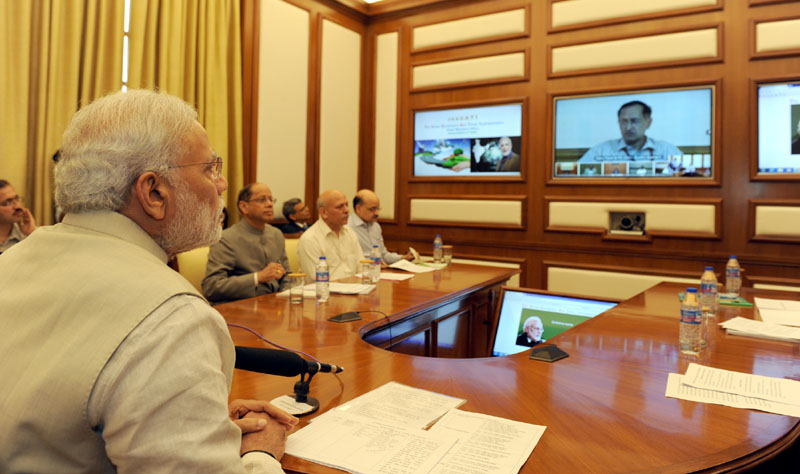 The platform for pro-active governance and timely implementation seeks to speed up government processes.

Held through a secure video conferencing link, the Prime Minister quizzed the envoys on state of bilateral relations and took stock of key projects on connectivity.

From Mukhopadhyay he inquired the progress of the trilateral (India, Myanmar, Thailand) highway and the envoy quickly explained on a map what the progress was and also briefed him on the strategic Imphal-Mandalay road.

Then Modi turned to the other, Envoy Shringla, and quizzed him on what the Thailand government had done and were the impediments, if any, to the project. As the Envoy briefed him on the trilateral task force meeting that Thailand had convened in September last year and that now New Delhi had to work on its commitments.

While the officials didnâ€™t comment of further details on what transpired in PMâ€™s review, the Prime Minister seemed satisfied by the performance of the Envoys.

Significantly, the exercise has put the Envoys on their toes and the PMâ€™s review will also lead to faster review of stalled projects.

South Block insiders say that it is a departure from being a one-way street where the Envoys would earlier rarely get an opportunity to interact with the PM, except on bilateral visits and their callons before they took charge.

This also saves India from diplomatic embarrassment as often many projects were announced during high level visits but were delayed because of red tape, forcing the envoys to be embarrassed before their hosts.

The Prime Minister through his interactions is also sending out a message to his officials to loosen up, as he did during his address on Civil Services day, where he told the officials to spend quality time with their families.Â

His address also reassured many officials that babus who will perform need not fear.

Among the issues discussed were two sets of public grievances of more than 20 people relating to the payment of Employees Provident Fund of private sector and Income Tax refunds, during which the key officials including the Prime Ministerâ€™s Principal Secretary Nriprendra Mishra, Cabinet Secretary, Ajit Seth were present in the PMO and Foreign Secretary S.Jaishankar and other officials joined in from South Block.