Home News Flash In Japan: Attack of the Drones 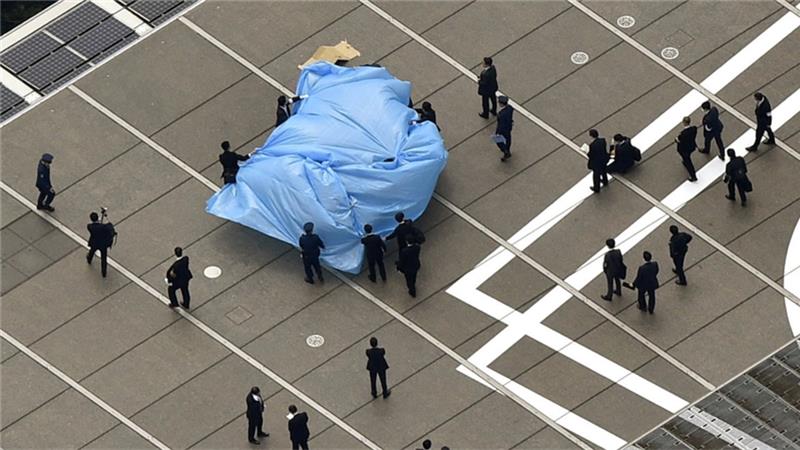 Authorities in Japan have launched an investigation after a small drone laced with radiation was found on the roof ofÂ the prime minister’s office.

No injuries or damage were reported in the incident, and police said on Wednesday that they were investigating the possibility it had crashed during a flight.

Video from public television broadcaster NHK earlier showed dozens of police officers and officials around the drone, which was covered by a blue tarpaulin.

The drone, which was about 50 centimetres in diameter, had four propellers and was carrying a small camera and a plastic bottle with unidentified content inside, Tokyo’s Metropolitan Police Department said.

It said the bottle was believed to be the source of radioactive cesium contamination.

The drone was also decorated with a symbol that warns of radioactive material, according to NHK.

Chief Cabinet Secretary Yoshihide Suga said the incident was a wake-up call to problems caused by the unmanned aerial devices, including possible attacks when Japan hosts a Group of Seven summit next year, as well as the 2020 Olympics in Tokyo.

“There is a possibility that drones might be used for terrorist attacks,” Suga told reporters at a news conference.

Small drones are becoming increasingly popular in Japan and are often used for performances, aerial filming and other purposes, but have been raising safety concerns.

In the US in January, a wayward drone flown by an off-duty intelligence employee crashed on grounds of the White House, raising questions over commercial and consumer drone use.

Japanese aviation laws have no restrictions for flying unmanned equipment at, or below, 250 metres above ground except for flight routes.