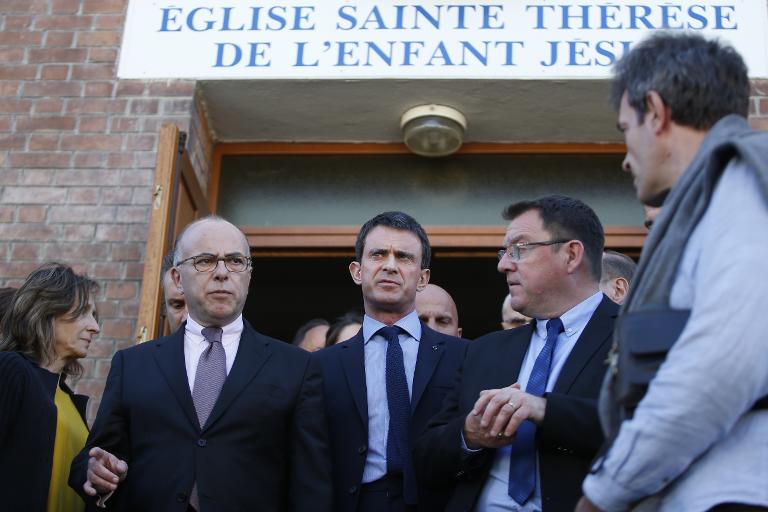 French police were hunting Thursday for possible accomplices to an Algerian student whose plan to attack churches was foiled when his arsenal of weapons was uncovered purely by chance.

Prime Minister Manuel Valls said the planned attack on one or more churches in the town of Villejuif just south of Paris was the fifth to be thwarted since 2013.

It was exposed less than four months after a jihadist killing spree in and around Paris that left 17 people dead.

“The threat has never been as high. We have never had to face this kind of terrorism in our history,” Valls told France Inter radio.

Sid Ahmed Ghlam, 24, was arrested on Wednesday after police stumbled upon his plans when he called paramedics saying he had accidentally shot himself in the leg.

An arsenal of four Kalashnikov rifles, several handguns and bulletproof vests were discovered in his car and at his student flat as well as jihadist literature mentioning Al-Qaeda and the Islamic State group.

Detailed plans to carry out an attack were also found.

Police said his DNA was also linked to the murder of a young mother in Villejuif who was found shot dead in the passenger seat of her car on Sunday.

They are now trying to untangle the complex web of events: Who else may have been behind the attack, how did Ghlam shoot himself in the leg, and why did he kill young mother Aurelie Chatelain?

Ghlam, a fresh-faced IT student with no criminal record, had previously drawn the attention of French intelligence agents over his postings on social networks expressing his desire to join jihadists fighting in Syria.

However a probe by intelligence services found nothing to go on, according to Interior Minister Bernard Cazeneuve.

The revelations about a planned attack that again escaped the radar of French intelligence services have highlighted the danger for France which is often singled out by jihadists as a prime target.

The arrest comes some three months after Islamic extremists gunned down 12 people at the Charlie Hebdo magazine, a policewoman and four others at a Jewish supermarket in a three-day reign of terror in the French capital.

The attack sent shockwaves around the world, and prompted several reforms in France including controversial new spy laws that are currently being debated in parliament.

Valls defended the overhaul of intelligence legislation saying it was long overdue and it “was not about tapping the phones of the whole population” and was about giving intelligence services “the means to be as effective as possible”.

Paris prosecutor Francois Molins said that Ghlam had told police “far-fetched” tales of how he had received the bullet wound to his leg, such as that he had shot himself while trying to throw his weapons into the Seine river.

Investigators are now focusing on whether Ghlam was acting alone.

Analysis of his communications equipment indicated Ghlam “was in touch with another person who could be in Syria on how to carry out an attack, with the latter clearly asking him to target a church,” said Molins.

“This type of individual does not act alone,” said Valls.

Police are also trying to figure out the mysterious link to 32-year-old Chatelain, who was found shot in the passenger seat of her vehicle, with her laptop still plugged in.

The young mother from the north of France was in the area for a pilates training course. Traces of her blood were found on one of Ghlam’s jackets, police said.

Several of Ghlam’s friends and family have since been detained. However, his sister told AFP that her brother was not an extremist. “My brother did not change. He was not radicalised. I am shocked by all that, we do not believe it.”

Hundreds of French nationals have joined jihadist ranks in Iraq and Syria, accounting for almost half the European fighters there, according to a report released this month by the Senate.

Valls said 1,573 French citizens or residents had been implicated in “terror networks”, 442 of whom were currently believed to be in Syria and 97 of whom had died there.

The fear is that many of these radicalised citizens will return and carry out attacks on French soil.

After the January attacks, security at sensitive sites such as religious buildings and media houses have been “permanently adapted to deal with the threat,” said Cazeneuve.