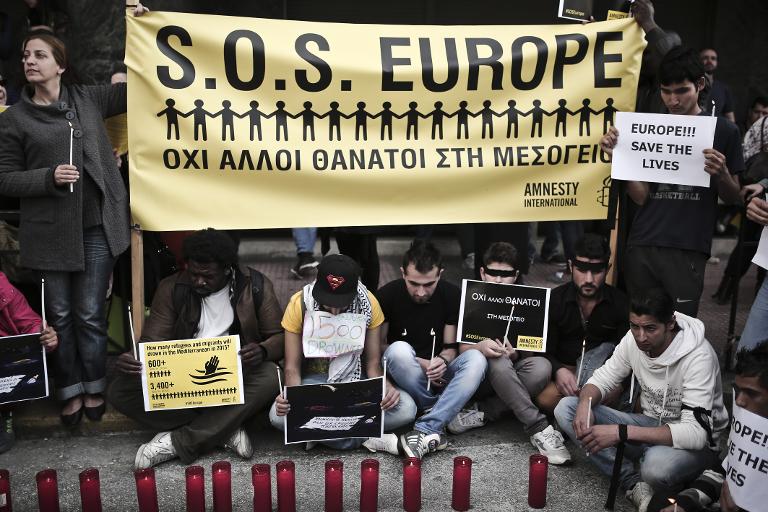 EU leaders sat down for crisis talks Thursday on possible military action against human traffickers in Libya, in a desperate bid to halt the tidal wave of refugees trying to reach Europe by sea.

The heads of state held a minute of silence for the hundreds of men, women and children who drowned Sunday in the Mediterranean’s worst migrant disaster, just hours after Malta honoured the more than 750 victims with a poignant inter-faith funeral service.

The wooden coffins of 24 of the dead were laid out on a red carpet in a tent outside the morgue at the Mater Dei hospital in Valletta and then carried away by Maltese soldiers for private burials.

“The migrants were escaping from a desperate situation,” the Bishop of Gozo, Mario Grech, told mourners. “They were trying to find freedom and seek a better life.

The talks in Brussels are expected to focus on a military response to the crisis, and a draft statement seen by AFP ahead of the summit committed leaders to “undertake systematic efforts to identify, capture and destroy vessels before they are used by traffickers”.

EU foreign policy chief Federica Mogherini was, according to the statement, “invited to immediately begin preparations for a possible security and defence policy operation to this effect, in accordance with international law”.

But even before the summit opened, the proposals drew criticism.

A “woefully inadequate and shameful response to the crisis”, said Amnesty International while the UN rights and refugees high commissioners described them as a “minimalist” response.

Dozens of migrants in Brussels staged a protest near the summit venue, attaching pieces of paper with the names of people who had died onto barbed wire put up as a security measure.

“Esther Down, 9 months old, Nigeria, drowned,” read one of the signs.

If the draft statement is approved, it would be the first time EU governments — under huge pressure to both check the tide of migrants and provide greater help to those whose boats run into trouble — use military force to fight illegal migration.

At the same time, “no one is talking about boots on the ground,” a diplomatic source cautioned.

The draft also addresses the sensitive issue of what to do with people once they land on Europe’s southern shores, proposing that member states provide resettlement to 5,000 migrants, a small fraction of the number arriving each year.

But as nationalist and anti-EU groups gain ground by capitalising on the immigration controversy, European Council chief Donald Tusk acknowledged this would be a challenge.

“It will be a discussion about readiness to sacrifice some national interests for the common good,” Tusk told reporters.

Survivor accounts, meanwhile, continued to trickle in as the full horror of the shipwreck near Libya emerged.

Even before their perilous sea journey, people smugglers beat several migrants to death and killed at least one minor, those who got out alive told investigators.

They said the smugglers operated a reign of terror before taking them by truck to the coast to be ferried by dinghy to the waiting boat.

A boy who climbed on to a dinghy before being told to was killed by the smugglers and his body tossed overboard, one survivor told investigators.

The skipper, Mohammed Ali Malek, 27, was one of the 28 survivors and faces charges of illegal confinement, culpable homicide, causing a shipwreck and aiding illegal immigration.

As he arrived at the summit, Prime Minister David Cameron said Britain would offer to deploy its flagship HMS Bulwark, three helicopters and two patrol ships to the Mediterranean, but stressed any migrant rescued would not have “immediate recourse to claim asylum in the UK.”

Belgium has also offered to provide a ship and logistical support.

Experts question how feasible a military response would be and warn it would mark an attempt to militarise what should be purely a humanitarian problem.

EU governments are also expected to agree to double the resources available to a maritime border patrol mission but that has been attacked as too little, too late by refugee and rights groups.

European Parliament President Martin Schulz complained there had been no real change in the EU’s migration policy in decades.

“The sort of speech I made in the 1990s I could make again today,” he told reporters.

Aid groups predict that if the crisis continues unabated, there could be 30,000 deaths at sea this year and Italy will have to process 200,000 migrants landing on its soil.