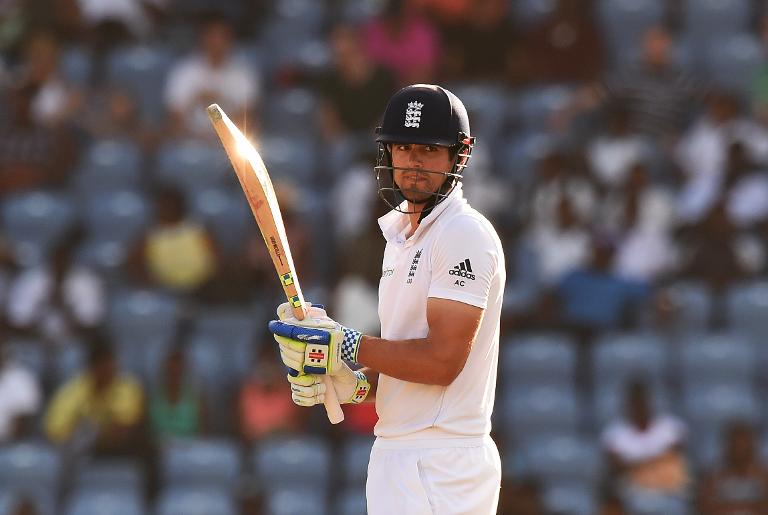 Alastair Cook closed in on becoming England’s highest Test run-maker on Wednesday as his team began their pursuit of West Indies’ 299 all out on the second day of the second Test.

Cook achieved a milestone during his unbeaten 37, going past former player Alec Stewart as his countryâ€™s second-highest run-getter in Test history with a tally of 8,484.

Only Graham Gooch, the former opening batsman and captain, remains ahead of him in the list of prolific English batsmen with an aggregate of 8,900.

Earlier, Englandâ€™s bowlers eventually overcame the determination of Marlon Samuels and an entertaining last-wicket partnership to dismiss the West Indies for 299 in their first innings on a rain-affected second day.

Devendra Bishoo (30) and Shannon Gabriel (20) got their Test-best scores in lifting the home side from 247 for nine after Samuelsâ€™ dismissal for a determined 103 triggered a lower-order collapse as the touristsâ€™ seamers made effective use of the second new ball.

It was left to Moeen Ali to close off the West Indies innings however, trapping Bishoo leg-before to end the visitorsâ€™ frustration and still leave them reasonably satisfied with the dayâ€™s work.

Persistent morning showers restricted the pre-lunch session to just 40 minutesâ€™ play with the hosts resuming at the overnight position of 188 for five.

When the action eventually resumed in mid-afternoon, Samuels, 94 not out at the start of the day in partnership with Denesh Ramdin, reached his seventh Test hundred with his 14th boundary off 226 deliveries shortly after the second new ball was taken.

However the 34-year-old, who was dropped on 32 by Cook at first slip off Jordan on the first afternoon, seemed to lose concentration upon reaching the treasured landmark in his 100th Test innings.

He missed a big drive at the next delivery from Anderson before edging the following one to Ian Bell for 103.

His effort in a 94-run sixth-wicket stand with Ramdin appeared to be in vain with the West Indies losing four wickets for 24 runs.

The captain fell to a catch at the wicket off Broad for 31. He added the scalp of Jason Holder, who perished in a similar manner in a rush of attacking strokeplay.

When Broad had Kemar Roach caught by Joe Root at slip from an inside-edge off his pads, a swift end to the innings seemed inevitable.

However Englandâ€™s bowlers lost their discipline and the pair of Bishoo and Gabriel capitalised in taking their team to within a single of the 300-run mark.

On a pitch as benign as the one in Antigua for the drawn first Test last week, the West Indies bowlers could suffer heavily should they depart from the fundamentals of line and length on the third day.