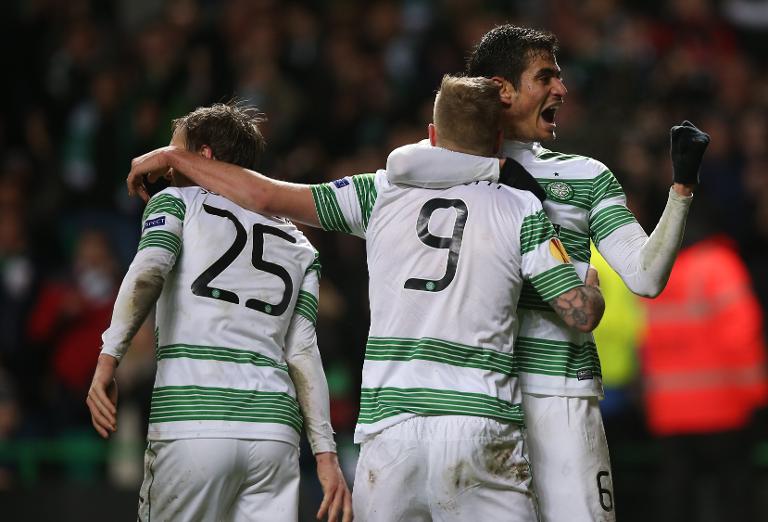 Celtic survived a nervy finish to earn a 2-1 win away to Dundee at Dens Park on Wednesday that put them eight points clear at the top of the Scottish Premiership.

The Glasgow giants took a 32nd minute lead through Gary Mackay-Steven, who gave Dundee goalkeeper Scott Bain no chance with a vicious volley.

Dutch defender Virgil van Dijk then increased their lead in the 63rd minute with a curling free-kick.

The Hoops looked to be in total control before Jim McAlister managed to pull one back for Dundee in the 87th minute to set up a frantic finish.

Victory helped Celtic get over the disappointment of Sunday’s Scottish Cup semi-final defeat by Inverness and edged Ronny Deila’s side closer to a fourth consecutive league title.

“That was a little bit naive of us to concede a goal so late, but we controlled the whole game,” Deila said.

“We scored two goals and should have scored more. We have scored a lot from set-plays this year, which is important.”

Dundee manager Paul Hartley thought his side’s quality in the final third let them down.

“I thought our final ball let us down tonight,” Hartley said.

“But overall we had a good disciplined performance and I was pleased with the players.”

Mackay-Steven was the first to threaten as he took a good touch after collecting a poor clearance at the edge of the box before sending a volley over the bar.

The first effort on target came from van Dijk, who rose to meet Stuart Armstrong’s corner at the far post, but his looping header was easily dealt with by Bain.

Former Dundee striker Leigh Griffiths then fired into the side netting as Celtic began to crank up the pressure on the home defence.

A goal finally came just after the half-hour mark when Mackay-Steven fired the Hoops in front.

An Armstrong free-kick was headed on by van Dijk and former Dundee United man Mackay-Steven raced into the box to volley into the top corner of the net.

The winger then caused some consternation in the Dundee defence with a low pass across the face of goal before James Forrest found himself with space in the box, only to fire his shot straight at Bain.

Nir Bitton started the second half by sending a powerful drive just wide from 25 yards before Dundee finally got a shot on target when defender James McPake went on a mazy run, but he slipped as he let fly and his shot was comfortably saved by Craig Gordon.

Celtic threatened moments later when Bain had to be alert to stop a Griffiths shot from 10 yards before they increased their lead in the 63rd minute.

Armstrong earned a foul after being brought down on the edge of the box and Dutch defender van Dijk curled a free-kick past Bain in a carbon copy of the goal he scored in last weekend’s Scottish Cup semi-final.

However, Dundee pulled a goal back three minutes from time through McAlister.

Luka Tankulic played a superb ball behind the Celtic defence and Paul McGinn’s low cross was swept home by the Dundee midfielder.