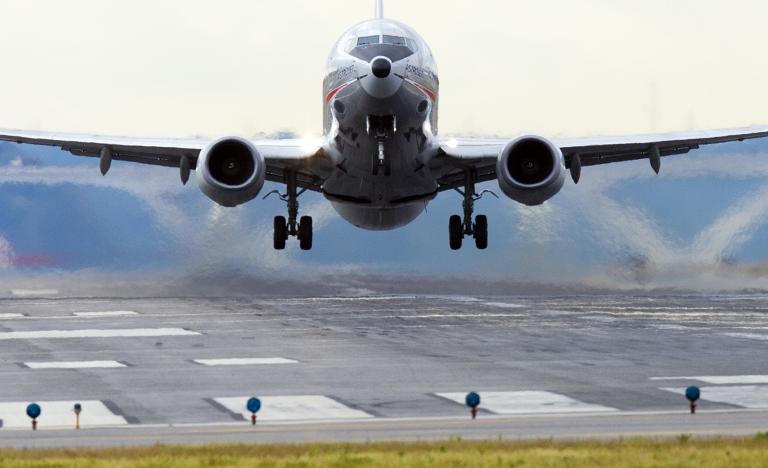 US aerospace giant Boeing reported Wednesday first-quarter net profit soared 38 percent from a year ago and reaffirmed its 2015 forecasts.

But revenue came in below the forecasts, 787 Dreamliner production costs continued to rise, and cash flow nose-dived.

For the first three months of the year Boeing had net earnings of $1.34 billion, compared with $965 million in the 2014 first quarter.

Adjusted earnings of $1.97 per share came in well above Wall Street’s consensus estimate of $1.81.

Led by higher commercial aircraft deliveries, revenue rose to $22.15 billion, up eight percent from a year ago. Analysts had expected $22.49 billion.

“The strong operational and financial performance reinforces our ability to continue providing competitive returns for our shareholders while investing in technology and our people,” said Boeing chairman and chief executive Jim McNerney in a statement.

The Boeing Company said it ended the first quarter with a $9.6 billion liquidity cushion, after repurchasing 17 million shares for $2.5 billion. It raised dividends by about 25 percent compared with a year ago and planned to repurchase the remaining $9.5 billion in shares in its buyback program over the next two to three years.

The Chicago-based company finished the first quarter with a backlog of orders worth $495 billion, including more than 5,700 aircraft.

During the first quarter, deliveries rose 14 percent to 184 jetliners, building on 2014’s record 723 commercial aircraft deliveries. Boeing predicted this year would break that record with deliveries between 750 and 755.

The Commercial Airplanes segment’s revenue leaped by 21 percent to $15.4 billion. Operating earnings for the division rose eight percent to $1.61 billion.

Boeing booked 110 net orders, with almost half of them for its new version of the best-selling 737 workhorse, the 737 MAX.

But the costs of producing its high-tech 787 Dreamliner continued to rise, Boeing said. The deferred production cost for the 787 totaled $26.94 billion in the first quarter, up three percent from the 2014 final quarter and 16.5 percent from a year ago.

Analysts have been looking for those costs to come down. The composite-fuselage aircraft entered service in 2011, more than three years late because of production problems.

In a conference call Wednesday, Boeing’s chief financial officer Greg Smith said that the 787 costs would continue to grow at a similar pace for the next couple quarters “before seeing a healthy decline in the growth later in this year.”

Boeing’s Defense, Space & Security business saw revenue fall 12 percent from a year ago to $6.71 billion amid US defense spending cutbacks. About a third of its backlog represented orders from international customers.

But first-quarter operating cash flow dropped 92 percent to $88 million. Boeing said the sharp decline was partly due to “timing of receipts and expenditures.”

“Boeing is perhaps learning the hard way that if you tell investors to focus on the cash flow, then you had better deliver it,” said Robert Stallard, an analyst with RBC Capital Markets, in a client note.