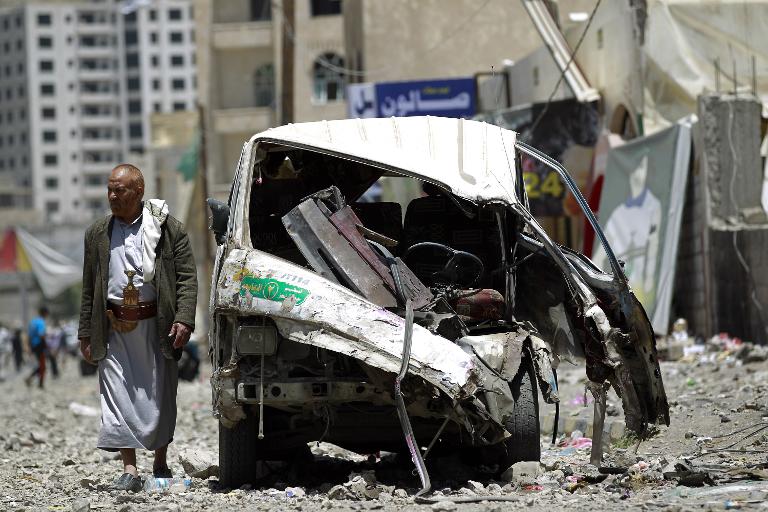 A Saudi-led coalition declared an end Tuesday to four weeks of air strikes in Yemen, saying it had eliminated the threat posed by Iran-backed rebels, as Washington welcomed the move and urged talks to end the crisis.

Despite the claims of success in a campaign launched by Sunni Arab nations to restore the authority of President Abedrabbo Mansour Hadi, the capital Sanaa remains in rebel hands and fierce clashes continue in the key southern city of Aden.

The coalition said its operations have entered a political phase but left open the option of resuming strikes against the Huthi Shiite militia if needed, and added that a naval and air blockade on the strategic country at the tip of the Arabian Peninsula will remain in place.

Shiite Iran welcomed the decision to halt the air war, calling it a “step forward” toward resolving the conflict, while there was no immediate reaction from the Huthis.

Hadi, in a televised speech from the Saudi capital where he fled in the face of a rebel advance that triggered chaos and a humanitarian crisis in his country, promised “victory” and vowed “we will soon return to our homeland, to Aden and Sanaa”.

The Saudi defence ministry said the air strikes had managed to “successfully remove threats to Saudi Arabia’s security and that of neighbouring countries” by destroying heavy weaponry and ballistic missiles seized by the Huthis.

While the White House said it welcomed the decision to halt the air war, it urged talks to end the crisis that threatened to draw regional powers into direct conflict.

The announcement came as a US aircraft carrier headed to the Arabian Sea, with Washington saying it was monitoring Iranian vessels suspected of carrying weapons to the rebels in violation of a UN embargo.

A coalition statement said the next step would aim to resume the political process in Yemen, delivering aid and “fighting terrorism” in the country, which is home to a deadly Al-Qaeda franchise.

Diplomatically, the coalition would seek “international cooperation” to prevent arms from reaching the rebels.

Speaking in Tehran, Iranian foreign ministry spokeswoman Marzieh Afkham said the “establishment of a ceasefire and a stop to the killing of innocent and defenceless people is a step forward”.

In remarks carried by state news agency IRNA, she said she hoped humanitarian aid would be sent soon and that “a situation for talks between Yemeni parties and groups for formation of a comprehensive government is resumed”.

But amid reports of a nine-ship Iranian convoy in the area, the US Navy said it was sending in the USS Theodore Roosevelt escorted by guided-missile cruiser USS Normandy.

Pentagon spokesman Colonel Steven Warren said media reports suggesting the Americans were preparing to prevent the Iranian convoy from reaching Yemen if it were carrying arms were “a bit over-cranked”.

“We don’t know what the Iranian convoy of ships plans to do, but we are watching them,” Warren said. “By having American sea power in the region, we preserve our options.”

In a stark reminder of the human toll of the campaign, the UN health agency said some 944 people have been killed and 3,487 wounded since the strikes were launched against rebels clashing with pro-government forces.

But the true numbers are likely higher, as many people are not making it to hospitals.

In his speech, Hadi thanked the coalition states, renewing accusations against Huthis who he said had brought in forces and military equipment from Iran.

He held the rebels “and their allies inside and outside (Yemen) are completely responsible for the latest developments which were a result of their futile actions.”

He however urged all Yemeni counterparts to work to implement UN Security Council Resolution 2216 “which paves the way for positive and effective dialogue.”

The resolution demands the Huthis pull back from all the territory they have seized, including from Sanaa, and that they return to peace talks.

Hadi said he had assigned newly appointed Vice President Khaled Bahah, who is also prime minister, and his government to respond to humanitarian needs in Yemen and urged world organisations “to cooperate with them to offer urgent aid”.

In Riyadh, a Western diplomat said he thought it was a “good time for the Saudis to get out of this”, even though the political objectives had not been achieved.

“The Huthis are still there where they had been before,” said the diplomat, who asked not to be identified.