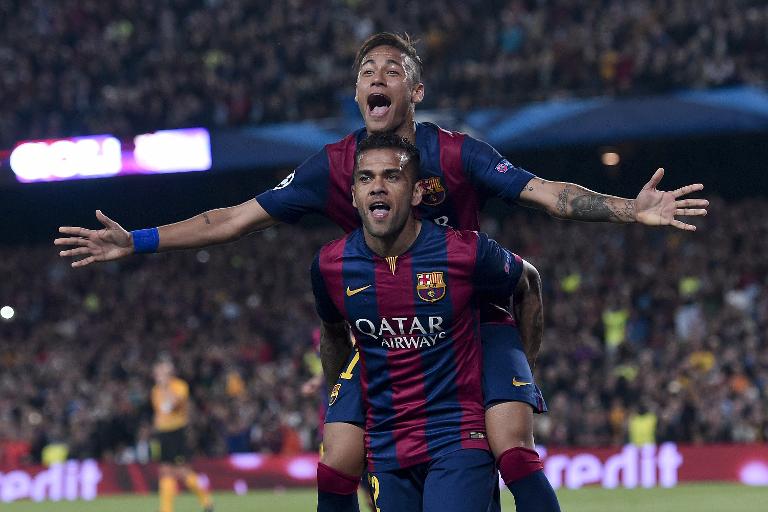 Barcelona cruised into their seventh Champions League semi-final in eight years as a double from Neymar handed them a 2-0 win over Paris Saint-Germain to seal a 5-1 aggregate victory on Tuesday.

Just as in last week’s first leg in Paris, the Brazilian opened the scoring after a sensational assist from Andres Iniesta.

Neymar then capitalised on some shoddy defending to head home his 30th goal of the season from Dani Alves’s cross.

Barca will now take their place alongside Bayern Munich in Friday’s draw for the last four, the ties to be played next month.

“I am very happy with the season I am having and we need to continue like this to achieve our objectives. We need to keep going and get to the final,” Neymar told Television Espanola.

“In my first goal Iniesta did everything. All I had to do was dribble past the goalkeeper and score.”

Barca boss Luis Enrique, meanwhile, lauded his players attitude despite having the tie already very much in their favour after the first-leg.

“We started the game very well. The players understood clearly what the game needed and played with an intensity, despite having the result in our favour, that was definitive,” he said.

“Everyone expected a better match from us, but they didn’t allow us to play well.

“The individual quality and collective quality of this team prevents you from playing at your best offensively and defensively.”

Only once in European Cup history had a side come back from losing the first leg at home 3-1 and there was little doubt about the outcome as Barca dominated proceedings from the off.

The opener arrived on 14 minutes as Iniesta collected the ball inside his own half, spun past three PSG challenges and then rolled the ball through to Neymar, who calmly rounded Salvatore Sirigu before slotting home.

PSG briefly threatened to respond as Zlatan Ibrahimovic had a goal rightly ruled out for offside against his old club on his return to the side from suspension.

However, Barca were soon back in command as Lionel Messi fired just over from Luis Suarez’s knockdown before Sirigu was forced into a flying save to turn away Alves’s powerful drive before clutching Neymar’s follow-up effort.

There was nothing the Italian could do 12 minutes before the break, though, as he was exposed by more shocking defending from the French champions as Alves was given plenty of time to pick out his compatriot and the unmarked Neymar powered a header into the bottom corner for his fifth goal in four games against PSG this season.

Barca boss Luis Enrique could afford the luxury of withdrawing Iniesta and Sergio Busquets at the start of the second period for Xavi and Sergi Roberto respectively with one eye on Saturday’s Catalan derby away to Espanyol.

With the hosts taking their foot off the gas, PSG did at least have the chance to add some respectability to the scoreline, but unlike Barca’s star front three of Messi, Suarez and Neymar, who now have 95 goals between them this season, they were wasteful in front of goal.

Marco Verratti passed up the best chance when he pulled his shot wide when well-placed at the edge of the area, whilst Ter Stegen did well to repel Ibrahimovic’s piledriver 18 minutes from time.

Messi had one final chance to move ahead of Cristiano Ronaldo as the leading scorer in Champions League history, but the Argentine’s goal drought in the competition stretched into four games as his shot flashed just wide.