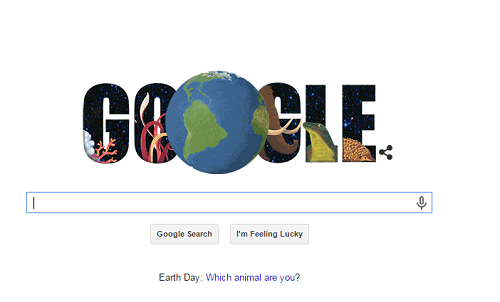 New Delhi: Â GoogleÂ is celebrating Earth Day 2015 with an interactive doodle on its homepage. The second â€˜Oâ€™ inÂ GoogleÂ was replaced by planet earth which can be seen spinning.Â

As we click on this year’s Earth Day logo, it takes us to the quiz page which helps us determine which animal most closely represents our personality.Â

“Earth Day is a great time to search for information on how to celebrate and protect our planet-and it’s now a great time to find out something about yourself too,” says a note shared by the Earth Day doodle crew.

The Google Earth Day quiz works on “any up-to-date browsers on your mobile or desktop browsers, including the Android and iOS Google Apps.”

The first Earth Day was celebrated on April 22, 1970 and was founded by US Senator Gaylord Nelson. The original Earth Day was attended by about 20 million Americans. The Earth Day movement went global in 1990. As ofÂ today, this day is celebrated in 192 countries around theÂ worldÂ and is coordinated by the Earth Day Network.Â April 22 was officially designated as the international Earth Day by the United Nations in 2009.

The day is marked to raise awareness and appreciation for our planet’s environment.

Google has been celebrating Earth Day through its popular doodles for the last 15 years.