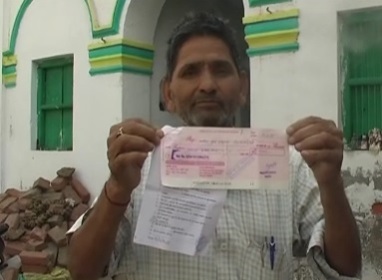 Mathura: Farmers in Mathura were a distressed lot on Tuesday when compensation cheques issued to them for crop damage by state government bounced.

Unseasonal rains and hailstorms have badly damaged crops in large parts of northern India and led to farmers venting their anger against Prime Minister Modi for not doing enough to help the distressed. Over 40 farmers have committed suicide in recent weeks.

Farmers in Mathura District alleged that the state government was making a fool out of them.

“I received the cheque on April 11. It was given by the government. They said that I would get the money as soon as I submit it in the bank. I did so but it bounced. In the memo it was written that they did not have money in their account,” said a farmer, Suresh Chandra.

The Uttar Pradesh Government has claimed that it has released $32.29 million from its contingency fund to cover the crop-related losses.

However, the farmers were outraged when the Faizabad District administration distributed cheques amounting to less than $5.

District magistrate Rajesh Kumar said a meeting of bank managers has been called and added that the banks have been instructed not to deny payment to the farmers as there is no dearth of funds.

“I came to know that this incident happened only in one branch and I informed the sub-divisional magistrate. I asked him to inform the higher authorities if such cases come to light. He has already issued notice. We have come to know about two or three cases, these will be solved soon,” said Kumar.

The compensation amount paid currently by the Centre depends on crop variety and the state where it is being grown. While this monetary benefit would rise, farmers will be able to seek aid even if 33% of their crop is damaged, as opposed to more than 50% currently.

It is not unusual for federal and state government compensation for crop damage to trickle down slowly, but farmers said they expected more from Modi, who came to power promising efficient and responsive government.

Unseasonable rains this year have damaged over 10 million hectares (24.7 million acres) of crops.