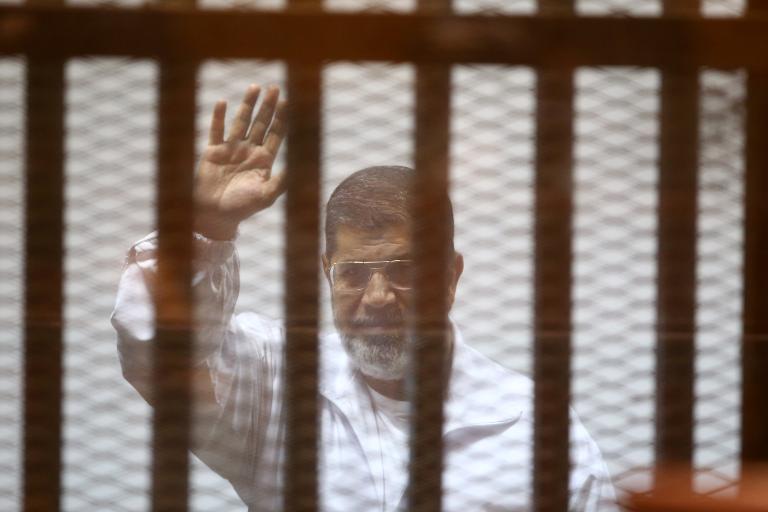 An Egyptian court sentenced ousted Islamist president Mohamed Morsi to 20 years in prison Tuesday for abuses against protesters but acquitted him of charges carrying a possible death penalty.

Morsi was convicted of ordering the arrest and torture of demonstrators involved in clashes in 2012 when he was president, in a verdict Amnesty International denounced as a “travesty of justice”.

The reaction from the United States was more circumspect, with the State Department saying it was concerned by the sentences.

Fourteen others were convicted of the same charges, with the Cairo court jailing most of them for 20 years.

The court acquitted the defendants of inciting murder in connection with the deaths of a journalist and two protesters during the December 5, 2012 clashes outside the presidential palace in Cairo.

Morsi, dressed in a white prison uniform and standing in a soundproof cage, raised his fists when the verdict was announced.

Defence lawyers said they would appeal, while rights groups voiced alarm at the ruling, the first in a series of trials Morsi is facing.

She called for a full retrial or the ex-president’s release.

US State Department spokeswoman Marie Harf said Washington would “review the basis” for the court’s decision, and that it was “concerned by these sentences.”

“All Egyptians are entitled to equal and fair treatment before the law,” she added.

But after just a year in power, Morsi was himself toppled by then-army chief and now President Abdel Fattah al-Sisi following mass street protests.

Morsi’s Muslim Brotherhood has been blacklisted and targeted in a crackdown that has seen hundreds killed and thousands jailed.

Other Brotherhood leaders have been sentenced to death, and Tuesday’s decision to acquit Morsi on the incitement to murder charge surprised some.

“We were expecting them to be convicted of murder,” said Ramy Ghanem, a lawyer for an anti-Morsi protester wounded in the clashes.

“But the sentences are not bad. We were expecting life in prison, but then 20 years is not very different,” he said. A life sentence in Egypt is 25 years.

“The illegitimate powers are trying to impose their tyranny through invalid sentences. This oppression will backfire as the revolution and public anger continue,” a statement said.

The Brotherhood had called for pro-Morsi protests Tuesday, but there were no reports of major rallies.

The movement has failed to mobilise supporters for several months following the government crackdown.

Morsi is facing two other trials in which he could face the death penalty, including on a charge of spying for foreign powers.

Verdicts in those cases are due on May 16.

Sisi has vowed to eradicate the Brotherhood, an 85-year-old movement that topped successive polls between Mubarak’s fall and Morsi’s presidential election victory in May 2012.

The authorities designated it a terrorist group in December 2013, making even verbal expressions of support punishable by stiff jail terms.

The crackdown has sparked a fierce backlash including from jihadist groups, who have claimed a string of deadly attacks on security forces.

Sisi was elected president last May, facing no serious challengers in a country where the military has held the reins of power for decades. His victory dashed the hopes of pro-democracy protesters who ousted Mubarak.

But his regime is popular among many Egyptians tired of political turmoil and seeking stability and economic growth.

Sisi has been accused of repression, and his crackdown has also targeted secular and liberal activists who spearheaded the uprising against Mubarak.

In November, a court dropped murder charges against Mubarak in his own trial over the deaths of hundreds of protesters in 2011.