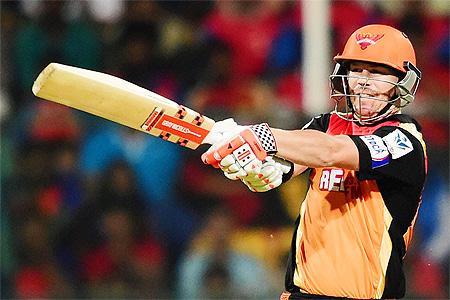 As rain played truant in the Sunrisers Hyderabad-Kolkata Knight Riders clash, the 174/6 piled by the SRH side was modified to 118 in 12 overs. Kolkata began the chase with Gautam Gambhir and Robin Uthappa, but just when the duo showed traces of looking comfortable, smashing the ball all over, Praveen Kumar nipped it in the bud, removing Gambhir for 4 in the 4th over.

As Manish Pandey made his way into the middle, Robin Uthappa was packed off to the pavillion by Henriques for 34, bringing Russell into the action. Bopara came into the attack and promptly showed Russell the door, removing him for 19. They were at 86/3 at the end of 10 overs, which meant that they would need another 32 runs from 12 balls. Pathan was the last man to fall, taken by Bhuvaneshwar Kumar for 6, pretty much sealing the deal for the Hyderabad side, bundling them off for 101/4.

Earlier, Kolkata won the toss and elected to bowl first. Opening the innings for the Sunrisers Hyderabad were Shikhar Dhawan and Warner and they briskly took the score to 36/0 and Warner was quick to notch up his half century. Dhawan respected the good balls, but didnâ€™t waste time dispatching the bad ones across the fence, taking the score to 80/0 in 10 overs.

The duo continued their anchoring effect, but Warner was removed by Morkel for 91 in the 15th over, taking the score to 133/1. Bopara was the new man in, but he departed even before he could settle down, dismissed by Morkel for 2, bringing Naman Ojha to join Dhawan in the middle. The next man to perish was Dhawan, who was sent back by by Russell for 54 in the 19th over, and the new man was Henriques. From the other end, Ojha was bundled off by Yadav for 18 and the Sunrisers wrapped up for 174/6.