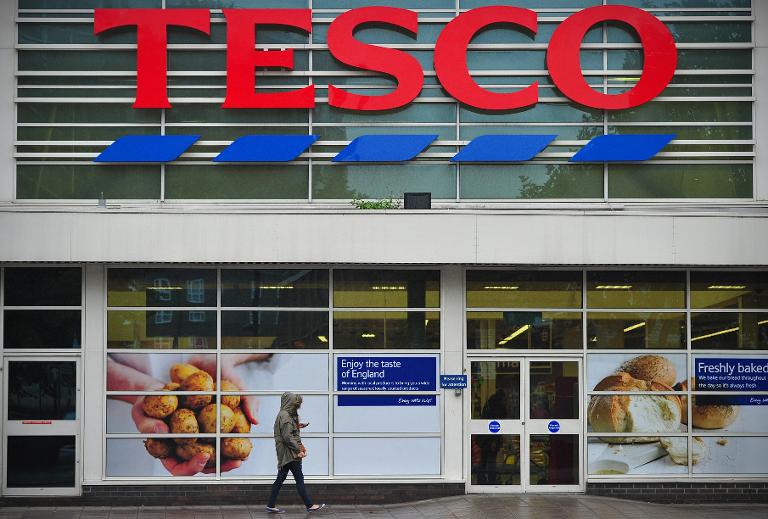 Britain’s troubled supermarket giant Tesco revealed Wednesday that it suffered a record loss last year as it took a huge writedown on the value of its property.

Tesco, hit by crisis last October after overstating profits in an accounting error, reported a loss after tax of Â£5.74 billion ($8.58 billion, 8.0 billion euros) in the 12 months to the end of February.

That compared with a net profit of Â£974 million in 2013/14, the nation’s biggest retailer said in a grim results statement that sent its share price plunging by more than five percent.

“It has been a very difficult year for Tesco,” chief executive Dave Lewis said in the statement.

“The results we have published today reflect a deterioration in the market and, more significantly, an erosion of our competitiveness over recent years.”

Tesco announced Â£7.0 billion of one-off charges, mostly linked to a writedown on the value of its property.

It also included an impairment of Â£630 million relating to Tesco’s investment with China Resources Enterprise Ltd in the Chinese supermarket sector.

Richard Hunter, head of equities at Hargreaves Lansdown Stockbrokers, described the extent of the impairments as “eye-watering”.

He added: “The outlook for the business remains unclear as management seek to spin several plates at once, with focus on such matters as the general restructuring, cost savings and an effort to regain some competitive composure.”

“Today’s record losses of Â£5.7 billion may well have been more than markets expected but in a way they are also encouraging, as they signal a determination by management to clean the slate and get on with turning the business around, and drawing a line under a pretty awful last couple of years,” said analyst Michael Hewson at CMC Markets.

“The market is still challenging and we are not expecting any let-up in the months ahead,” added Lewis, who joined Tesco in September.

Shortly after his arrival, Tesco revealed that it had overstated profits by Â£263 million as a result of accounting errors stretching back to before 2013.

Britain’s Serious Fraud Office is probing the accounting blunder at the group, which is the world’s third-biggest supermarket chain after France’s Carrefour and global leader Walmart.

“It is not possible to predict the timescale or outcome of the SFO investigation, but the SFO could decide to prosecute individuals and the Group, and there is the possibility of fines, or other consequences,” Tesco said on Wednesday.

The scandal sparked the suspension of eight Tesco executives and the resignation of chairman Richard Broadbent. Lewis has meanwhile already said he will shut a number of loss-making stores and scrap plans to open more outlets.

Simon Johnstone, senior analyst at Kantar Retail, said: “Tesco’s brand is still in need of updating to appeal to UK shoppers who are now being actively courted by the discounters.”