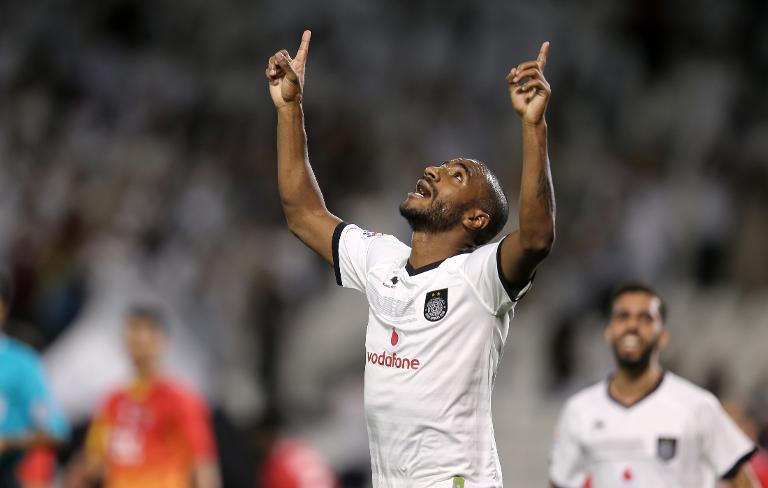 Qatar’s Al Sadd were among a trio of former champions to make the last 16 of the Asian Champions League on Tuesday after a fine strike by Brazilian forward Muriqui gave them a 1-0 win over Iran’s Foolad Khuzestan in Doha.

The 2011 champions joined 1991 and 2000 winners Al Hilal of Saudi Arabia and top Chinese side Guangzhou Evergrande who took the crown in 2013.

Al Sadd, who finished second behind Lekhwiya in the Qatar Stars League that concluded last week, were unlucky to score only one goal in a fairly entertaining game at the Jassim bin Hamad Stadium.

But that was enough to give them 10 points from five matches in Group C, the same as Al Hilal, who beat Uzbekistan’s Lokomotiv 2-1 earlier in the day in Tashkent.

The two teams will meet on May 5 to decide the group winners, while Foolad Khuzestan and Lokomotiv will play no further part in the competition.

Al Sadd enjoyed better possession and struck through Muriqui, who drilled the ball home from close range in the 43rd minute after Hassan al-Haydos had done well to provide him with the assist despite being off balance.

Muriqui, who helped Guanghzou Evergrande win the title two years ago and is the Chinese teamâ€™s highest-ever goal-scorer, later went close on a couple of occasions, while his Brazilian compatriot Grafite and Qatar superstar Khalfan Ibrahim also missed chances.

The UAE side went ahead through Everton Ribeiro in the 16th minute before Mohanad Aseri equalised for the Saudis in the 77th and Bruno Cesar scored the winner in second half added time.

The Saudis top the group with 11 points, followed by Uzbek side Nasaf — who beat Iranian outfit Tractorsazi 2-1 — with seven and UAE’s Al Ahli on five.

Earlier, Fabio Cannavaro’s Guangzhou needed only a 0-0 draw against FC Seoul to qualify top of Group H and reach the knock-outs alongside Suwon Samsung but Western Sydney Wanderers’ title defence was left hanging by a thread.

The Wanderers suffered a harsh blow when Mu Kanazaki scored in injury-time to secure a 2-1, come-from-behind win which dragged Kashima Antlers off the foot of the table.

With one group game left, against Guangzhou, the Australian side are now bottom of Group H, a point adrift of FC Seoul and Kashima and with their grip on the title slipping.

The Wanderers won the competition in a fairytale debut last year and they seemed to have kept their unconvincing trophy defence alive with Nikita Rukavystya’s strike on 24 minutes.

But Kashima pressed relentlessly for the equaliser and they got their breakthrough on 66 minutes, when Shoma Doi curled home a priceless goal which kept them in the competition.

Kashima kept on coming and they were rewarded with a deserved win when Kanazaki converted Shuto Yamamoto’s penetrating cross in the first minute of injury time.

Beijing Guoan could have joined Suwon in the knockout rounds but they lost 1-0 at home to Australian champions Brisbane Roar, through Andrija Kaluderovic’s goal in the first half.