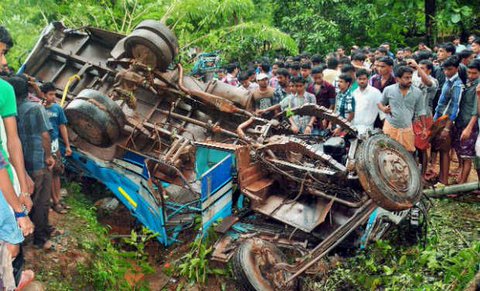 Fourteen Indian pilgrims were killed and more than two dozen others injured when the bus they were travelling in plunged into a gorge on the outskirts of the Nepalese capital on Wednesday morning.

The victims, all from Gujarat, were returning to India after visiting Pashupatinath Temple in Kathmandu when the driver of the bus lost control and the vehicle went off the highway. The bus plunged nearly 300 metres before coming to a halt on the banks of a river.

“The incident happened at 7:20 am (7:05 IST) between Nagdhunga and Naubise, barely five kilometers from the Kathmandu city limits,” said Basudev Ghimire, the chief development officer of Dhading district.

The dead included eight women and six men. Twelve people were killed instantly while two more died while being taken to hospital in Kathmandu, police said.

“The bus bearing number GJ-14-X-990 had two tiers and was carrying 45 passengers. Twenty-five of the injured have been admitted to various hospitals in Kathmandu. Some passengers may still be missing,” said a duty officer at the Nepal Police control room.