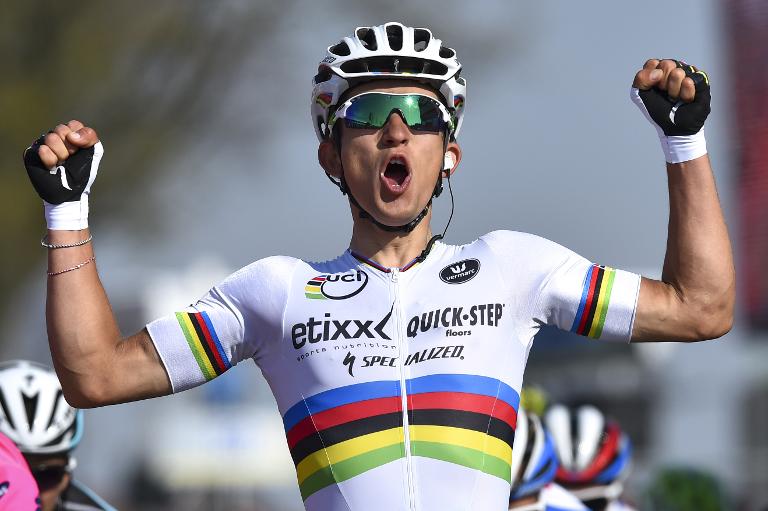 World champion Michal Kwiatkowski will be a marked man when the 205.5km Fleche Wallonne Ardennes Classic race gets underway on Wednesday.

The 24-year-old Pole comes into the race off the back of a sensational victory at Sunday’s Amstel Gold race.

Not since Philippe Gilbert in 2011 has anyone managed to triumph in all three Ardennes Classics in the same season but Kwiatkowski has ridden into form at just the right time and would seem a good bet for just such a feat.

The Etixx-Quick Step rider’s in bullish mood to boot.

“For sure, winning Amstel Gold Race in the rainbow jersey (of the world champion) means a lot to both me and the team, and it is another example of how strong we are as a collective,” said Kwiatkowski.

“I built up really well for this race, and winning (there), which was my goal, I cannot describe my emotions. It’s really big for me at this point in my career.”

Last year he followed up a fifth placed finish in Amstel with third at both Fleche and Liege-Bastogne-Liege.

That was a marked improvement on the year before when he took fourth at Amstel and fifth at Fleche before Liege proved a race too far for such a young rider and he trailed in 92nd.

Kwiatkowski, though, has gone from strength to strength since then and after winning Strade Bianche last year in March, he ended the season by winning the world title in September.

Last year at the infamous Mur de Huy finish to the Fleche, he didn’t quite time his attack right, going too soon and being easily overhauled by Spaniard Alejandro Valverde, who was second behind the Pole at Amstel.

Valverde will likely be the main competition once again as not only did he demonstrate his form on Sunday, but he is the defending champion and a two time winner on the wall of Huy.

He was also in good form last month at the Tour of Catalonia, winning three stages and taking second overall behind Richie Porte.

Valverde is in his element at the Ardennes Classics having won in Liege twice as well and claiming 11 podium finishes across the three races.

Last year he simply timed his attack perfectly while others had launched theirs too soon.

As ever with the Fleche Wallonne, winning is all about timing your effort just right on the final of three ascensions up the infamous Mur de Huy climb, which includes a section with a 26 percent gradient.

It’s also important to be in the right position at the foot of the climb or else you risk being boxed in and forced to follow the wheel in front while waiting for a gap to open up.

The Fleche has almost always been won on the Mur but organisers have thrown a spanner in the works this year with a climb just 5km before Huy that is almost as brutal.

Both are 1.3km long and although at an average gradient of 9.6 percent, the Mur is tougher, the Cote de Cherave at 8.1 percent does at least offer an opportunity to produce an initial selection of potential winners, or maybe even a chance to breakaway for the win.

The pace is bound to crank up before the peloton hits the Cherave and anyone caught behind at that point will have no chance of getting back in the mix by the time the leading group reaches the Mur.

Previous winners such as Spanish pair Joaquim Rodriguez and Dani Moreno, or even Gilbert, may be looking at that section to launch an attack.