Home Science & Tech Telescope that transformed our view of space 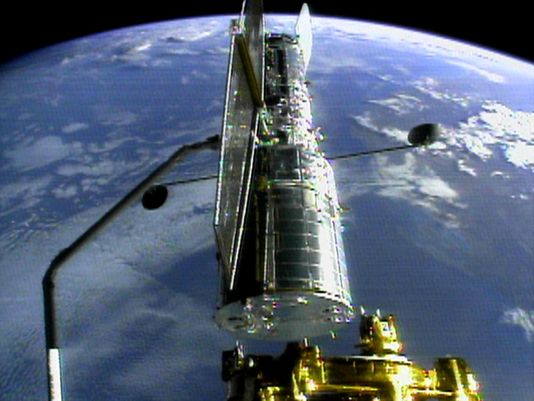 Greenbelt: Hubble, the first telescope to revolutionize modern astronomy and change our view of the universe by offering glimpses of distant galaxies, marks its 25th year in space this week.

“Hubble absolutely has changed the way humans look at the universe and our place in it,” said astronomer Jennifer Wiseman, one of the telescope’s senior scientists at NASA’s Goddard Space Flight Center in Greenbelt, Maryland.

“It shows us that the universe has been changing over time, that stars in fact are an integral part of producing the type of element that we need for life, for planets, for our well-being,” she said.

Launched on April 24, 1990 aboard the Space Shuttle Discovery, Hubble orbits the Earth. It doesn’t travel to faraway stars but instead snaps incredible pictures of them.

The telescope is the fruit of a collaboration between NASA and the European Space Agency.

Hubble is celebrated as a triumph these days, but almost as soon as it was launched, a major problem was discovered with its main mirror and it did not become operational until three years later. Its repair required a special space shuttle mission in 1993.

After that, the Hubble space telescope became a veritable legend in its own right, exploring the depths of space from its circular path around Earth and transmitting astonishing images of supernovas, or massive explosions that occur with the death of a star, and other celestial bodies.

One of Hubble’s best known images is of the vast Carina Nebula, an interstellar cloud of dust, hydrogen gas, helium gas and plasma that lies some 6,500 light years away from Earth.

Hubble, which is named after the pioneering American astronomer Edwin Hubble (1889-1953), has also shown us black holes at the heart of galaxies scientists did not previously know existed.

The 24,000-pound (10-ton) telescope has taken more than a million pictures, including some that have allowed astronomers to more precisely calculate the age of the universe — about 13.8 billion years old.

Observations from the Hubble combined with powerful telescopes on Earth helped astrophysicists confirm in 1998 that the universe appears to be expanding at an accelerating rate, which earned two Americans the Nobel Prize for Physics in 2011.

Other Hubble discoveries include the first detection of an organic molecule in the atmosphere of a planet circling a distant star far from our galaxy, the Milky Way, and the fact that planetary formation is a relatively common process.

Closer to home, Hubble has advanced knowledge of our own solar system. In March, NASA announced that Hubble had detected a vast ocean under the surface of Ganymedes, Jupiter’s biggest moon, widening the range of known celestial bodies on which life forms may exist.

“Hubble has been a major player in enabling people around the world to have a sense of wonder about the universe that we live in,” said Wiseman.

The spectacular images that Hubble has sent back have been described as “the most flamboyantly beautiful artworks of our time,” according to British art critic Jonathan Jones.

Hubble’s images have made their way into popular culture, and can be seen in countless books and even on a Pearl Jam album cover.

Wiseman believes that Hubble still has a few good years ahead of it, as it is in perfect working condition since the last visit by space shuttle astronauts in 2009.

It will continue to operate alongside its successor, the James Webb Space Telescope, which will be 100 times more powerful and should launch in 2018.

The telescope is so steady and accurate that it can take an image of a target without deviating more than 7/1000th of an arcsecond, or about the width of a human hair seen at a distance of one mile (1.6 kilometers), according to NASA.

This is also like being able to shine a laser beam on a dime 200 miles away.

Hubble orbits the Earth at an altitude of 340 miles, not much higher than the International Space Station.

It completes one orbit every 95 minutes, and travels at a speed of 17,000 miles per hour.

Hubble sends back about 140 gigabits of raw science data every week, and has helped scientists publish more than 12,800 scientific papers, making it one of the most productive scientific instruments ever built, according to NASA.

The telescope has five instruments that have been updated or added in space, as well as some others that have been removed over the course of five maintenance missions by astronauts on the space shuttles in 1993, 1997, 1999, 2002 and 2009.

It is powered by the sun, and its electricity is stored in six nickel-hydrogen batteries, the equivalent of 20 car batteries.