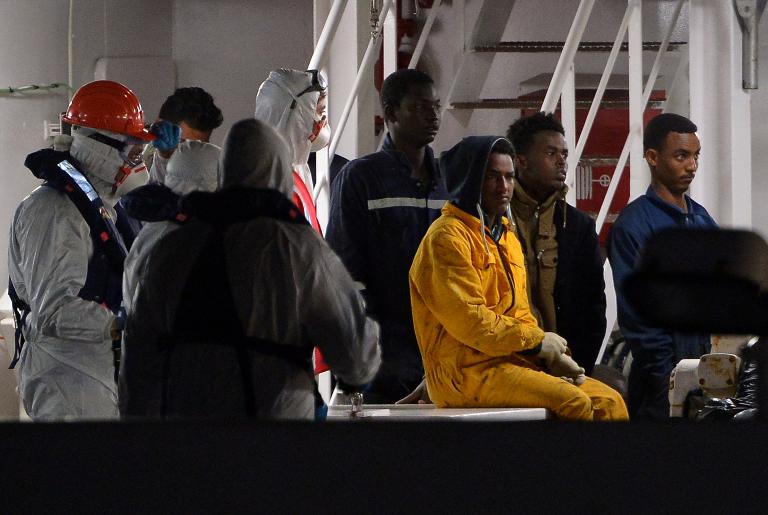 Italian police on Tuesday arrested the captain and first mate of a boat involved in the Mediterranean’s deadliest disaster in decades on suspicion of murder, causing a shipwreck and involvement in illegal immigration.

The two seamen, who have not been formally charged, were being held as part of a probe into a catastrophe that has evoked chilling comparisons with the slave trade and allegations of callous disregard on the part of European governments.

As the UN’s refugee body said at least 800 people had died following Sunday’s capsizing of an impossibly overcrowded fishing boat off Libya, authorities in Sicily said they had detained the boat’s Tunisian skipper and his Syrian number two.

Hundreds of the victims, including an unknown number of children, will have died in horrific circumstances having been locked in the hold or the middle deck of the 20-metre (66-foot) boat which keeled over in pitch darkness as a Portuguese container ship arrived to answer its distress call.

Italian Prime Minister Matteo Renzi on Monday described the traffickers who packed their human cargo into the boat as akin to 18th-century slave traders.

The UN human rights chief Zeid Ra’ad Al Hussein said the horror at sea had been produced by a “monumental failure of compassion” on the part of European governments who are now under intense pressure to address the humanitarian crisis on their southern shores.

The first of the 27 survivors who disembarked here in the early hours did so in a wheelchair. All of them were deeply traumatised, said Carlotta Sami, spokeswoman for the UN High Commissioner for Refugees.

“They are exhausted, they have nothing left,” she said. “They are in a state of shock, they look completely lost.”

Most of the survivors and the victims appear to have been young men but there were also several children aged between 10 and 12, she added.

“We have not yet been able to ask them about this but it seems certain that many of them will have had friends and family who were lost in the wreck.”

At talks in Luxembourg on Monday, EU ministers agreed on a 10-point plan to double the resources available to the bloc’s much-criticised maritime border patrol mission Triton and further measures will be discussed at a summit of EU leaders on Thursday.

The survivors, who hailed from Mali, Gambia, Senegal, Somalia, Eritrea and Bangladesh, were all recovering Tuesday at holding centres near Catania on Sicily’s eastern coast.

Sunday’s disaster was the worst in a series of migrant shipwrecks that have claimed more than 1,700 lives this year and nearly 5,000 since the start of 2014.

In that time nearly 200,000 migrants have made it to Italy, mostly after being rescued at sea by the Italian navy and coastguard.

Italian officials believe there could be up to one million more would-be immigrants to Europe waiting to board boats in conflict-torn Libya.

Unveiling the 10-point action plan, EU foreign policy chief Federica Mogherini said Europe had to live up to its humanitarian values and commitments towards migrants. “To send them back is another way of killing them,” she said.

A number of EU governments are reluctant to expand search-and-rescue operations, arguing that they only encourage migrants to attempt the crossing.

That view was endorsed Tuesday by Australian Prime Minister Tony Abbott, who said Europe should follow his government’s lead by deploying military forces to turn migrant boats back to Africa.

“The only way you can stop the deaths is in fact to stop the boats,” Abbott said.

Australia’s policy has drastically reduced the number of asylum-seekers arriving on its soil and deaths at sea.

Critics say this has been achieved at the expense of the country breaching its obligations under international conventions on the right to asylum for people fleeing persecution and war.

The EU will also try to capture or destroy people-smuggling boats and introduce a pilot scheme for the fast-track return of migrants to their home countries.

Italy is studying the possibility of mounting “targeted interventions” against Libya-based people smugglers — but experts are sceptical about the likelihood of this ever happening.

More than 1,000 people have been arrested in recent years in connection with trafficking operations but Italian officials acknowledge most of them are bit players and that the gangsters making multi-million pound profits from the trade are still mostly at large