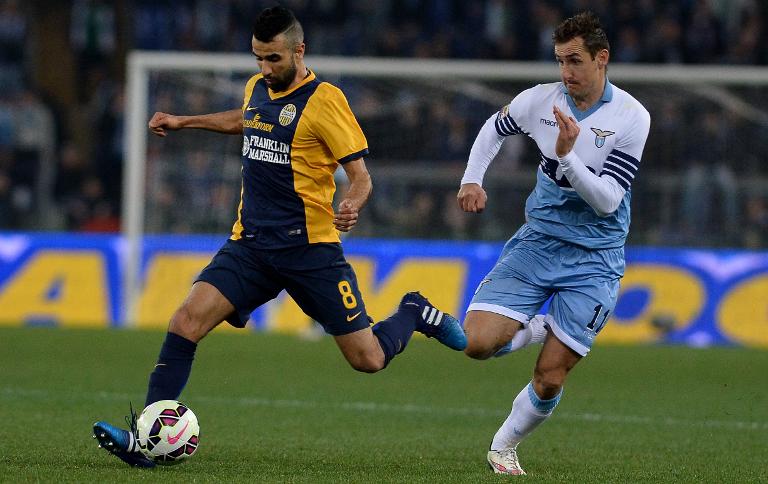 Moroccan Mounir Obbadi came off the bench to score his maiden Serie A goal in the final minute as Verona dented Fiorentina’s hopes of securing a place in the Europa League next season with a 1-0 victory on Monday.

Fiorentina hosted Verona in the final fixture of the weekend with the chance to replace misfiring Sampdoria in fifth place.

But the hosts, who lost Khouma Babacar because of a knock he took to his knee only seven minutes after the Senegalese striker replaced Josip Ilicic, failed to capitalise on several clear chances and were made to pay towards the end of a dramatic second half.

Fiorentina should have taken the lead in the 71st minute but Vincenzo Montella’s men saw Verona ‘keeper Rafael expertly parry Alessandro Diamanti’s penalty after the ‘keeper had rushed out of his goal and fouled Alberto Gilardino.

Obbadi, on loan from French league side Monaco, replaced Panagiotis Tachtsidis only a few minutes later and delivered a first warning when he first-timed a cross from the right side of the area just beyond post and crossbar with Neto well beaten.

The Moroccan midfielder was given a second chance to open his account in Italy’s top flight and seized it with both hands, firing past Neto after the ‘keeper spilled Lazaros Christodoulopoulos’s drive from the edge of the area.

It was only Verona’s ninth win of the campaign and moved Andrea Mandorlini’s men up to 14th place, 13 points clear of the drop zone.

“It was a crucial game for us. Now, we’re sure to stay up and over the next games we’ll try to improve our league standing,” said Mandorlini.

“We were lucky at certain points but for what we put in during the last 20 minutes we deserved to win the game.”

Fiorentina’s eighth loss of the season kept La Viola in sixth spot and has given a boost to several direct rivals for the league’s two Europa League places.

“We were doing well and I don’t think we really deserved the defeat.”

Juventus put one hand on what would be their fourth consecutive scudetto on Saturday with a 2-0 win over Lazio which stretched the champions’ lead over their opponents to 15 points.

There were no less than six draws in Italy’s top flight at the weekend and Roma, who could only draw 1-1 at home with relegation candidates Atalanta, remain third on the same points as Lazio.

Napoli, five points adrift of Lazio and Roma on 53 points, are still hopeful of challenging for one of the league’s three Champions League qualifying spots but remain fourth, following a comprehensive 3-0 away win at relegation-threatened Cagliari.

Sampdoria, held to a scoreless draw by second-from-bottom Cesena on Saturday, are three points further adrift in fifth.

Inter Milan were held to a scoreless draw in the city derby on Sunday and remain 10th, one point behind AC Milan and eight behind Sampdoria.