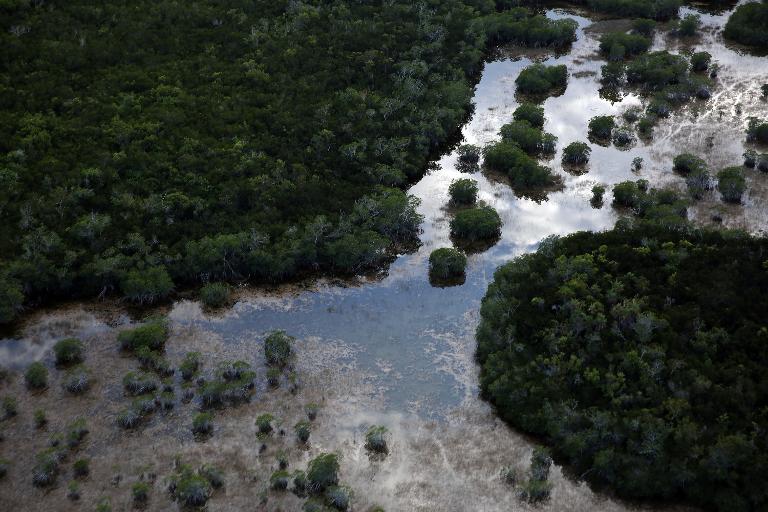 US President Barack Obama will travel to Florida’s Everglades Wednesday hoping to reframe the debate on climate change ahead of a vital few months that will shape his environmental legacy.

On “Earth Day” Obama will swap Washington’s turbid political waters for gator-infested wetlands, in the hope of putting America’s cherished national parks — and their economic impact — front-and-center of a bitter partisan debate.

Early in Obama’s administration, environmental groups were dismayed that a candidate who had promised to upend George W. Bush’s climate-skeptical stance was forced to spend much of his first term tackling the economy before pivoting to health care reform.

But since then, the White House has notched a string of climate victories, including a landmark bilateral deal that committed China to emissions cuts and new vehicle efficiency standards.

The climate “has definitely emerged as a clear priority in the second term” said Ben Longstreth, a senior attorney at an environmental group, the Natural Resources Defense Council.

Obama is about to embark on a final climate push, before the campaign to succeed him as president occupies all political bandwidth in Washington.

“This is an issue that’s bigger and longer-lasting than my presidency,” Obama said in his latest weekly address.

To win over critics, the White House is looking to augment tried-and-tested arguments about custodianship.

Earlier this month Obama stressed the health impact of climate change and in his weekly address he put it in a security context, saying “there’s no greater threat to our planet than climate change.”

In Florida, he is expected to put the focus on the economic benefits.

“He will be showing how tackling climate change means protecting our local businesses and economies,” said senior advisor Brian Deese.

The White House wants to illustrate that Obama’s environmental measures have done nothing to hamper a long period of jobs growth — an effort to undercut arguments that carbon cuts lead to job cuts.

“But I can tell you with certainty, it would have a devastating impact on our economy,” Rubio said.

Next year marks centennial of the service that manages the National Parks, which writer Wallace Stegner famously called “the best idea we ever had.”

As if to underscore that point, Obama on Sunday went for a walk with his family to Great Falls Park just outside Washington and has declared this week National Park Week.

It is the beginning of a White House drumbeat that administration officials say will extend through a summer of environmental rulemaking to a major summit in Paris in December.

The measures, expected to be released in the US summer, face fierce opposition in the courts and Congress, not least from Senate Majority leader Mitch McConnell, who represents the coal-rich state of Kentucky.

But McConnell is not Obama’s only political problem.

According to the Center for American Progress — a White House-allied think tank — 30 percent of roll calls in this Republican-dominated Congress’s first 100 days concerned energy or the environment.

During “74 percent of the energy and environmental votes … a majority of senators supported the anti-environment position,” the think tank asserted.

Environmentalists, and the White House, hope those positions are becoming increasingly untenable, but political opposition may be fierce.

“There are different stages to the denial,” said Longstreth, “going from saying that ‘climate change does not exist’ to saying ‘I’m not a scientist’ reflects the fact that the first position is not tenable anymore.”

The crescendo of White House policy announcements will peak in December when countries of the world will meet in Paris to thrash out a new global climate accord.

Countries are hoping to forge a binding agreement on how to start bringing down emissions and the Obama administration is keen to be seen to lead.

Obama’s success in persuading Americans that climate change is a serious problem may prove vital.

In Paris the White House will try to “use progress in the United States to leverage global action,” according to Pete Ogden, once the director of climate change on Obama’s National Security Council.

“Having a strong, credible domestic plan has been absolutely essential to the ability to help negotiate a really historic agreement with China,” he said.

“I think they have every intention of trying to build on that success and in Paris use their domestic accomplishments to really build that global solution to this challenge.”