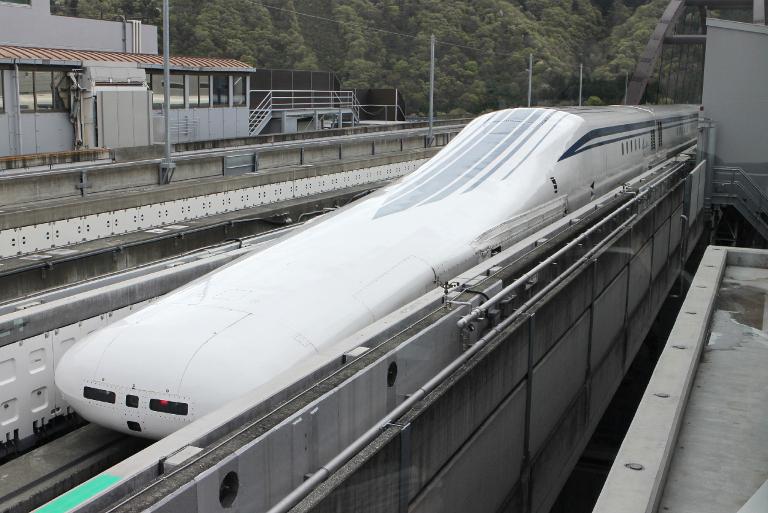 The new record came less than a week after the company recorded a top speed of 590 kph, breaking its own 2003 record of 581 kph.

The maglev hovers 10 centimetres (four inches) above the tracks and is propelled by electrically charged magnets.

About two hundred train buffs gathered to Tuesday’s record-setting run, with the crowd cheering as the train broke through 600 kph per hour.

“It gave me chills. I really want to ride on the train,” an elderly woman told public broadcaster NHK as the carriage rocketed past her.

“It’s like I witnessed a new page in history.”

An AFP reporter who previously rode on the super-speed train said the experience was like taking off in a plane, with the feeling of g-force gathering as the speedometer is pushed ever higher.

“The faster the train runs, the more stable it becomes — I think the quality of the train ride has improved,” Yasukazu Endo, who heads the maglev test centre southwest of Tokyo, told reporters Tuesday.

JR Central wants to have a train in service in 2027, plying the route between Tokyo and the central city of Nagoya, a distance of 286 kilometres.

The service, which would run at a top speed of 500 kph, is expected to connect the two cities in only 40 minutes, less than half the present journey time in Japan’s already speedy bullet trains.

By 2045, maglev trains are expected to link Tokyo and Osaka in just one hour and seven minutes, slashing the journey time in half.

However, construction costs for the dedicated lines are astronomical — estimated at nearly $100 billion just for the stretch to Nagoya, with more than 80 percent of the route expected to go through costly tunnels.

Japan is looking to sell its shinkansen bullet and maglev train systems overseas, with Prime Minister Shinzo Abe acting as a travelling salesman in his bid to revive the Japanese economy partly through infrastructure exports.

He is due in the United States this weekend, where he will be touting the technology for a high-speed rail link between New York and Washington.

â€œThis technology is something that will bring great benefits to Japan and hopefully the United States one day,” Kennedy said after the ride.

The maglev train is a contender for US President Barack Obama’s multi-billion-dollar national high-speed rail project.

Abe said Japan would not charge licensing fees in the US for the train, a strong incentive for Washington to select the system for a high-speed rail line between Washington DC and Baltimore.

The proposed 60-kilometre link will represent the first phase in the US government’s plan to connect the capital and Boston.

Japan started its study on the maglev train system as a national project in 1962, and succeeded in running at a speed of 60 kph a decade later.