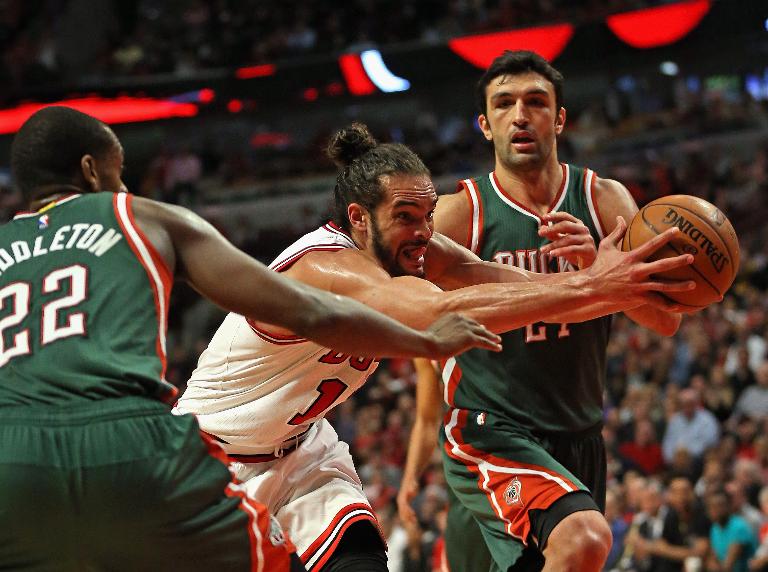 Jimmy Butler scored a playoff career high of 31 points as the Chicago Bulls took a 2-0 first round playoff series lead with a 91-82 win over the Milwaukee Bucks on Monday.

Butler scored 14 of his game high points in the fourth quarter for the Bulls, who maintained home court advantage in the best-of-seven Eastern Conference series.

“So far so good,” Bulls Pau Gasol said. “We just played two games and won both of them. Rebounding is a key factor, especially this time of year. We have to keep working on it.”

Bulls guard Derrick Rose added 15 points and nine assists after being held scoreless in the first half.

Rose added nine assists and seven rebounds. Gasol had 11 points, 16 rebounds and four blocks, and Joakim Noah tallied a game-high 19 rebounds for the Bulls, who have won eight of the last nine against their Central Division rival.

“A lot of my scoring goes to (my teammates) for drawing so much attention,” Butler said.

In the night contest, Klay Thompson scored 12 of Golden State’s final 16 points to carry the Warriors past the New Orleans Pelicans in game two of their Western Conference series.

Guard Khris Middleton paced the Milwaukee attack with 22 points. Guard Michael Carter-Williams added 12 points for the Bucks, who were outscored 20-8 down the stretch.

“We’re going to fight to get this series back to even and protect our home court,” Middleton said of the series switching to Milwaukee’s arena.

– Butler steps up in the fourth –

Bucks coach Jason Kidd said they had no answer for Butler.

“I thought we played a pretty good game on the road, giving ourselves an opportunity to win,” Kidd said.

“Butler was a one-man show in being able to shoot the three and also get to the basket.

“We’ve got to get open shots and finish at the rim. We missed a lot of bunnies in the paint.”

Milwaukee centre Zaza Pachulia picked up his second technical foul in a 1:12 span and was ejected after he got tangled up with Nikola Mirotic going for a loose ball.

“This is the playoffs and it’s going to be physical,” Kidd said. “Nothing more. Nothing less. Both teams are playing to win.”

Milwaukee was limited to just one basket over the final four minutes of the game.

In Oakland, Thompson scored 14 of his 26 points in the final quarter to lead a late surge by the Warriors as they converted a one-point game into a double-digit victory.

Stephen Curry, who was held scoreless in the fourth quarter, finished with 22 points and six assists in the win. Draymond Green added 14 points and 12 rebounds for Golden State.

Game three will be Thursday at the Smoothie King Center arena in New Orleans.

“We need to get a good start and set the tone,” Curry said of playing on the road. “We got to grind it out. It is going to be like that every game. We have to be ready to do that.”