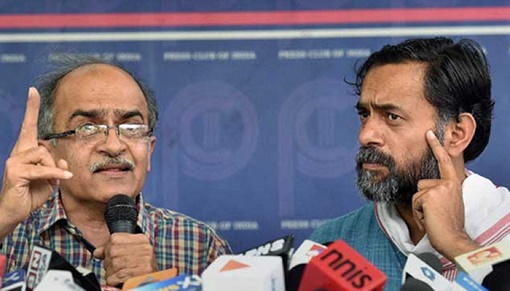 The decision was conveyed by party spokesperson Deepak Bajpai who said along with the two founding members, Anand Kumar and Ajit Jha had also been expelled by AAP’s national disciplinary action committee.

“The party’s national disciplinary committee has taken a decision to expel Prashant Bhusan, Yogendra Yadav, Anand Kumar and Ajit Jha. They were expelled for gross indiscipline, anti-party activities and violation of code of conduct of the party,” Bajpai said.

This decision comes after bothÂ Bhushan and Yadav delivered a stinging reply to the show-cause notice issued to them by the party’s national disciplinary committee.

The party had issued show-cause notices to the four leaders on Friday who had rebelled against AAP conveyner and Delhi chief minister Arvind Kejriwal.

The party in a news release said, the responses to the show-cause notices by the four rebels were found to be unsatisfactory.Â

The duo had earlierÂ accused party chief Kejriwal of “gross violation” of its constitution and attacked two members of its disciplinary panel for allegedly doing a “planted” story and accepting donations from dubious firms.Â

Responding to show-cause notices issued by AAP’s National Disciplinary Committee (NDC), Bhushan and Yadav questioned its locus standi for seeking their reply, saying the panel was formed after the “illegal” and “unconstitutional” meeting of the party’s National Council on March 28.Â

Yadav claimed that Kejriwal’s decision to resign as the chief minister in his first term and his move to stage a dharna outside Rail Bhavan had been taken after “bypassing” the relevant decision-making bodies of the party.Â

“Major political decisions were taken bypassing the relevant decision-making bodies. No committee was even consulted in major decisions like resignation ofÂ DelhiÂ government in February, 2014, diversion of resources to Varanasi and Amethi constituencies and the allocation of funds to candidates during the Lok Sabha elections.Â

“The majority NE decision (15 for, 4 against) to allow state units to decide about state Assembly elections was not implemented till it was reversed in the next meeting. The PAC decision on the CM staging a dharna was unilaterally overturned by the CM himself,” he said.Â

In their response to the notice, issued to them on April 17, the duo questioned Pankaj Gupta and Ashish Khetan’s presence on the disciplinary committee, saying their inclusion “smacks” of packing it in such a way so as to ensure a desired outcome.Â

They added that the two had led a smear campaign against them and, in such a scenario, how can they be the “judges” in this case.Â

They also accused Khetan of doing a “planted” story and said that, instead of taking action against him, the former journalist has now been rewarded by being named chairperson of the Delhi Dialogue commission and appointed as a member of the party’s NDC.Â

Referring to the case of a donation of Rs 2 crore allegedly from dubious firms, Bhushan said that instead of referring the case to the then party Lokpal, Admiral L Ramdas, the ombudsman himself was sacked from the post.Â

Ajit Jha and Anand Kumar, the two other AAP leaders issued with show-cause notices, too, submitted their responses.Â