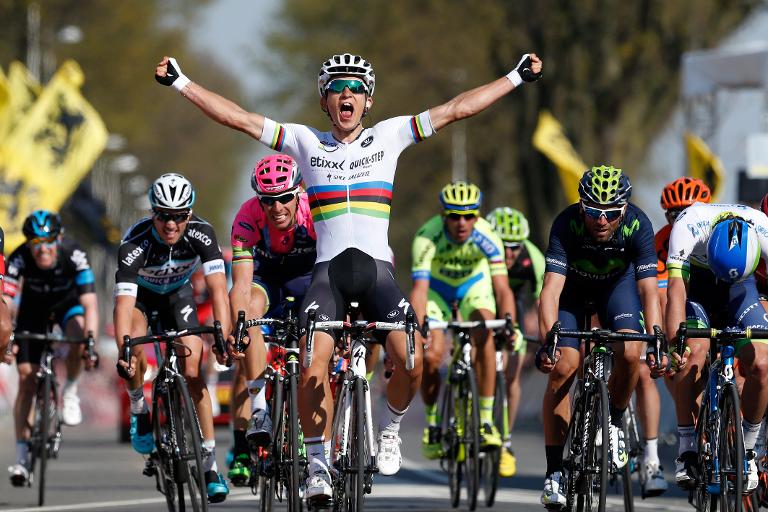 World champion Michal Kwiatkowski of Poland claimed his first one-day victory of the year in winning the first of three Ardennes Classics, the Amstel Gold Race on Sunday.

Kwiatkowski finished the 258km race from Maastricht to Valkenburg ahead of Alejandro Valverde of Spain and Australia’s Michael Matthews.

It was the 24-year-old’s first win in a major Spring Classic race, this the first of three Ardennes Classics in the space of a single week.

His only previous victory this year had been in the Pris-Nice stage race prologue.

It was also a welcome boost for his Etixx-Quick Step team that had endured a frustrating Spring so far with second-placed finishes at Paris-Roubaix, the Tour of Flanders, Gent-Wevelgem, E3 Harelbeke and Omloop Het Nieuwsblad, although Mark Cavendish had won Kuurne-Brussels-Kuurne.

Kwiatkowski said he was really struggling towards the end but teammate Gianni Meersman had convinced him everyone else was too.

“That gave me a lot of motivation before the last time up the Cauberg. I’m really thankful they (his team) believed in me until the last moment,” said the Pole.

“In cycling you never know what to expect from those around you. You might look around and feel like no-one is suffering, but you don’t know the true situation until the last important acceleration. “

Kwiatkowski was fifth at Amstel, the biggest race in the Netherlands, last year, also securing third-placed finishes at both Fleche Wallonne and Liege-Bastogne-Liege.

He was part of a small group that broke clear on the final Cauberg climb, the apex of which came 1.8km from the finish.

“For the sprint I was able to sit in the slipstream and breathe a little bit, and that was important to recover from the effort on the Cauberg,” added Kwiatkowski.

“I was able to get some energy back to go full gas in the select group sprint and win.”

After finishing fourth last year and second in 2013, Valverde was happy with his finish but said he thinks Liege-Bastogne-Liege will provide his best chance of an Ardennes victory.

“For me, Liege is the race out of the three where I think I stand more chances, the one that suits me best, but of course we mustn’t rule anything out for Wednesday (Fleche),” said the Spanish Movistar leader.

“For my first time attempting the final at Amstel, I have to be happy with the result,” he said. “I’m happy with the way I rode, I left everything out there. It’s just unfortunate that it wasn’t for the victory.”

They were caught with 15km left, although Clarke battled on for a further 7km before the inevitable happened.

Belgian Gilbert, who won all three Ardennes Classics in 2011, briefly distanced all but Matthews on the Cauberg climb but although the pair crested it clear, a small group caught them in the run-in to the finish.

Matthews and Van Avermaet, whose build-up had been blighted by his implication in a doping scandal and the disappointment of third-placed finishes at both ‘Monument’ cobbled classics — Paris Roubaix and the Tour of Flanders — opened their sprints first but Kwiatkowski powered through to take the win.